This year’s Nobel Prize in Economics has been awarded jointly to three economists - Abhijit Banerjee, Esther Duflo and Michael Kremer - for their “experimental approach to alleviating global poverty." 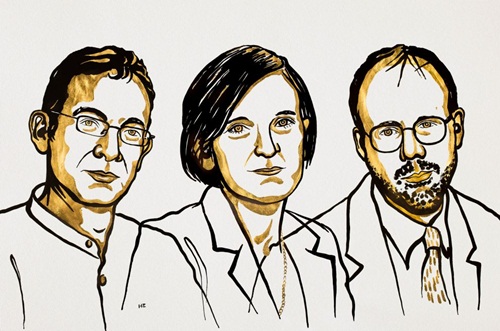 The three will share the prize money of the Sveriges Riksbank Prize in Economic Sciences in Memory of Alfred Nobel 2019 of 9 million Swedish krona equally.
Banerjee, an India-origin economist, is currently the Ford Foundation International Professor of Economics at the Massachusetts Institute of Technology (MIT).
Duflo is also from MIT, while Kremer is the Gates Professor of Developing Societies at Harvard University.
All three are also known for their work at the Abdul Latif Jameel Poverty Action Lab (J-PAL) is a global research centre that works to reduce poverty by ensuring that policy is informed by scientific evidence.
“The research conducted by this year’s Laureates has considerably improved our ability to fight global poverty. In just two decades, their new experiment-based approach has transformed development economics, which is now a flourishing field of research. Despite recent dramatic improvements, one of humanity’s most urgent issues is the reduction of global poverty, in all its forms. More than 700 million people still subsist on extremely low incomes.
“Every year, around five million children under the age of five still die of diseases that could often have been prevented or cured with inexpensive treatments. Half of the world’s children still leave school without basic literacy and numeracy skills, the awards committee noted.
The three rsearchers have introduced a new approach to obtaining reliable answers about the best ways to fight global poverty. In brief, it involves dividing this issue into smaller, more manageable, questions – for example, the most effective interventions for improving educational outcomes or child health. They have shown that these smaller, more precise, questions are often best answered via carefully designed experiments among the people who are most affected.
In the mid-1990s, Michael Kremer and his colleagues demonstrated how powerful this approach can be, using field experiments to test a range of interventions that could improve school results in western Kenya.
Abhijit Banerjee and Esther Duflo, often with Michael Kremer, soon performed similar studies of other issues and in other countries. Their experimental research methods now entirely dominate development economics.
The Laureates’ research findings – and those of the researchers following in their footsteps – have dramatically improved our ability to fight poverty in practice, the according to the committee.
As a direct result of one of their studies, more than five million Indian children have benefitted from effective programmes of remedial tutoring in schools. Another example is the heavy subsidies for preventive healthcare that have been introduced in many countries.
These are just two examples of how this new research has already helped to alleviate global poverty. It also has great potential to further improve the lives of the worst-off people around the world, it added.
Abhijit Banerjee, born in 1961 in Mumbai, received his PhD from Harvard University, Cambridge, USA in 1988. He is a Ford Foundation International Professor of Economics at Massachusetts Institute of Technology, Cambridge, USA.
Esther Duflo, born in 1972 in Paris, France, received her PhD from Massachusetts Institute of Technology, Cambridge, USA in 1999. She is Abdul Latif Jameel Professor of Poverty Alleviation and Development Economics at Massachusetts Institute of Technology, Cambridge, USA.
Michael Kremer, born in 1964, received his PhD from Harvard University,
Cambridge, USA in 1992. He is currently Gates Professor of Developing Societies at Harvard University, Cambridge, USA.
MORE REPORTS