Ananth Kumar, union minister for chemicals and fertilisers and parliamentary affairs and senior BJP leader, passed away at a hospital in Bengaluru early this morning. Ananth Kumar, 59, was battling cancer and had returned from the US last month after treatment at a New York hospital. 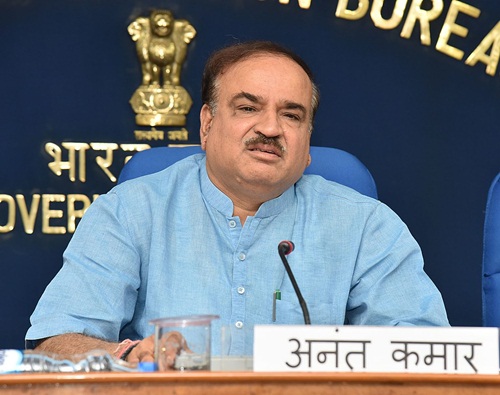 The senior BJP leader had been on a ventilator in the Intensive Care Unit of the Shankara Cancer Hospital in Bengaluru  for the last few days.
The minister's wife Tejaswini and two daughters were with him in his last moments. His body will be kept at National College grounds in Bengaluru for last respects.
The national flag will fly at half mast across the country as a mark of respect to the union minister. Karnataka has announced three-day state mourning and all schools, colleges and offices are closed today.
Prime Minister Narendra Modi described him as a remarkable leader, an able administrator and a great asset to the BJP.
“Ananth Kumar Ji was an able administrator, who handled many ministerial portfolios and was a great asset to the BJP organisation. He worked hard to strengthen the Party in Karnataka, particularly in Bengaluru and surrounding areas. He was always accessible to his constituents.
“Extremely saddened by the passing away of my valued colleague and friend, Shri Ananth Kumar Ji. He was a remarkable leader, who entered public life at a young age and went on to serve society with utmost diligence and compassion. He will always be remembered for his good work”, the prime minister said.
Ananth Kumar represented Bengaluru South in Lok Sabha. Kumar helped strengthen the BJP in the southern state.
He was the force behind the NDA government’s low-cost medicine scheme launched nationwide, which has immensely benefitted the poor. As minister of chemicals and fertlisers, he also helped revive state-run fertiliser units.
Ananth Kumar was one of the few ministers to have also served in the earlier BJP-led government led by Atal Bihari Vajpayee. He was also the "youngest" minister.
He was minister for civil aviation, tourism, sports, urban development and poverty alleviation in the Atal Bihari Vajpayee's cabinet in 1998.
The six-time MP from Karnataka was the first person to speak in Kannada in the United Nations.
President Ram Nath Kovind also expressed his condolences. “Sad to hear of the passing of Union minister and veteran parliamentarian Shri H N Ananth Kumar. This is a tragic loss to public life in our country and particularly for the people of Karnataka. My condolences to his family, colleagues and countless associates,” a tweet from Rashtrapathi Bhavan stated.
Karnataka Chief Minister HD Kumaraswamy said Kumar was a "friend beyond politics" and a value-based politician. "Our families had a friendship beyond politics. He always valued and had given priority to friendship. I have lost a great friend in his death," the chief minister added.
A graduate in Arts and Law, Kumar was associated with the Akhila Bharatiya Vidyarthi Parishad (ABVP), a student organisation affiliated to the BJP), before joining the BJP in 1987.
As a student activist, he was also jailed along with other ABVP leaders during the Emergency of 1975.
He was elected to the Lok Sabha in 1996. In 1998, he became the youngest member of the Vajpayee cabinet and he returned as minister in 1999.
In 2003, he became the BJP's Karnataka chief. The party won the highest number of seats in the assembly and the Lok Sabha under his stewardship.
The parliamentarian from south Bengaluru constituency held charge of two ministries in the Narendra Modi government -- Chemicals and Fertilisers since May 2014 and Parliamentary Affairs since July 2016.
Union Minister DV Sadananda Gowda expressed grief over his death. "Shocked, it's unbelievable. My friend, brother Ananth Kumar is no more," he wrote.
Defence Minister Nirmala Sitharaman also expressed sorrow over his death. "Deep sense of grief on hearing that Shri Ananth Kumar is no more with us. Served BJP all along. Bengaluru was in his head and heart, always. May God give his family the strength to bear with this loss," she tweeted.
MORE REPORTS