Minister of state for external affairs MJ Akbar has finally stepped down amid nearly 20 women leveling sexual assault allegations against him and at least seven of them saying they were ready to testify against the journalist turned minister. 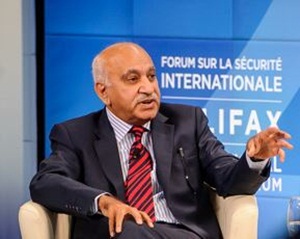 Akbar, however, reiterated that while he is stepping down from his post he stood by his decision to challenge the “false accusations” leveled against him. He also said he is stepping down to fight the case on his own.
"Since I have decided to seek justice in a court of law in my personal capacity, I deem it appropriate to step down from office and challenge false accusations levied against me, also in a personal capacity. I have, therefore, tendered my resignation from the office of Minister of State for External Affairs. I am deeply grateful to the Prime Minister Shri Narendra Modi and to the External Affairs Minister Smt. Sushma Swaraj for the opportunity they gave me to serve my country," Akbar is reported to have stated in Tweet.
In fact, Akbar has challenged the allegations against him in the Patiala House Court in the national capital. He filed a criminal defamation suit against journalist Priya Ramani, who was among those who accused him of sexual harassment.
The court is slated to hear the case filed by Akbar tomorrow (18 October).
The minister has been accused of sexual harassment by at least 20 women journalists in the so-called “MeToo” rush on social media. Akber has denied all allegations leveled against him, referring to them as "false, wild and baseless".
The Congress party had been demanding Akbar's resignation since the allegations came to the fore.
Akbar had alleged political reasons behind the allegations against him, pointing that they came ahead of the 2019 Lok Sabha elections.
"Why has this storm risen a few months before a general election? Is there an agenda? You be the judge. These false, baseless and wild allegations have caused irreparable damage to my reputation and goodwill," he had said.
MORE REPORTS