The Royal Swedish Academy of Sciences has decided to award one half of the Nobel Prize in Chemistry 2018 to Frances H Arnold with the other half shared by George P Smith and Sir Gregory P Winter. 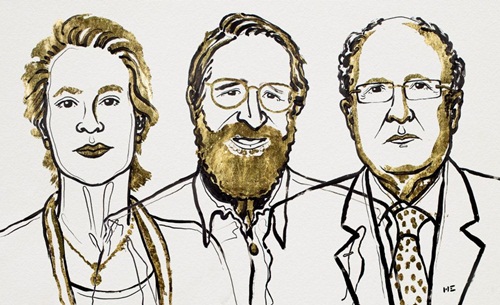 Of the prize amount of 9 million Swedish krona, one half will be awarded to Frances Arnold and the other half will be shared between George Smith and Gregory Winter.
The power of evolution is revealed through the diversity of life. The 2018 Nobel Laureates in Chemistry have taken control of evolution and used it for purposes that bring the greatest benefit to humankind. Enzymes produced through directed evolution are used to manufacture everything from biofuels to pharmaceuticals.
Antibodies evolved using a method called phage display can combat autoimmune diseases and in some cases cure metastatic cancer.
Since the first seeds of life arose around 3.7 billion years ago, almost every crevice on Earth has filled with different organisms. Life has spread to hot springs, deep oceans and dry deserts, all because evolution has solved a number of chemical problems. Life’s chemical tools – proteins – have been optimised, changed and renewed, creating incredible diversity.
This year’s Nobel Laureates in Chemistry have been inspired by the power of evolution and used the same principles – genetic change and selection – to develop proteins that solve mankind’s chemical problems.
Frances H Arnold in 1993 conducted the first directed evolution of enzymes, which are proteins that catalyse chemical reactions. Since then, she has refined the methods that are now routinely used to develop new catalysts.
The uses of Frances Arnold’s enzymes include more environment friendly manufacturing of chemical substances, such as pharmaceuticals, and the production of renewable fuels for a greener transport sector.
In 1985, George Smith developed an elegant method known as phage display, where a bacteriophage – a virus that infects bacteria – can be used to evolve new proteins.
Gregory Winter used phage display for the directed evolution of antibodies, with the aim of producing new pharmaceuticals. The first one based on this method, adalimumab, was approved in 2002 and is used for rheumatoid arthritis, psoriasis and infammatory bowel diseases. Since then, phage display has produced antibodies that can neutralise toxins, counteract autoimmune diseases and cure metastatic cancer.
We are in the early days of directed evolution’s revolution which, in many different ways, is bringing and will bring the greatest beneft to humankind.
Frances H Arnold, born 1956 in Pittsburgh, USA, received his Ph.D from University of California, Berkeley, USA in 1985. He is Linus Pauling Professor of Chemical Engineering, Bioengineering and Biochemistry, California Institute of Technology, Pasadena, USA.
George P Smith, born in 1941 in Norwalk, USA received his Ph.D from Harvard University, Cambridge, USA, in 1970. He is Curators’ Distinguished Professor Emeritus of Biological Sciences, University of Missouri, Columbia, USA.
Sir Gregory P Winter was born 1951 in Leicester, UK. He received his Ph.D from the University of Cambridge, UK in 1976. He is a Research Leader Emeritus, MRC Laboratory of Molecular Biology, Cambridge, UK.
MORE REPORTS