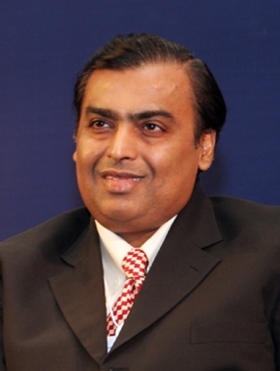 Ambani's estimated wealth rose to a whopping $44.3 billion on Thursday last week as Reliance Industries Ltd's shares shot up by 1.6 per cent. Against this, Alibaba Group founder Ma's wealth stood at $44 billion at close of Thursday’s trading in the US market.
The spike in Reliance Industries’ market cap comes after Reliance doubled its petrochemicals capacity, which also added $4 billion to Ambani's fortune in 2018. Ambani also announced plans to leverage his telecom venture Jio Infocomm with its 215 million subscribers to expand into e-commerce on a big scale.
The RIL stock, which has been rising for the five consecutive sessions, hit a 52-week high of Rs1,091 on the BSE on Thursday last, after Ambani announced aggressive business plans in the AGM.
The RIL stock has been on an uptrend ever since and has gained 13.05 per cent since 5 July.
At the AGM, Mukesh Ambani had unveiled an ultra high-speed fixed line fibre broadband for homes and enterprises across 1,100 cities and also announced plans for an e-commerce platform to rival the likes of Amazon.
Ambani who spearheaded construction of the world’s largest refining complex in Jamnagar, now also owns the most-widespread mobile data network globally and claims to have India’s biggest as well as most-profitable retail firm.
At this month’s annual shareholders’ meeting, Ambani said Reliance saw its “biggest growth opportunity in creating a hybrid, online-to-offline new commerce platform,” involving the group’s Reliance Retail Ltd. and Reliance Jio businesses. The "size of Reliance will more than double" by 2025, Ambani said at the meeting.
MORE REPORTS