Musk and Mark raise the muck

It is not just Hollywood or even Bollywood celebrities who make waves when they talk, tweet or shoot their mouths off. 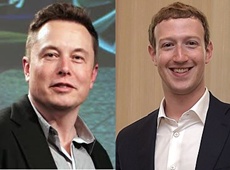 Increasingly, multi-billionaire entrepreneurs have also started responding to the hunger for ‘news’ by tweeting their taunts.
The latest to do so is Elon Musk, who has got the Facebook pages of his firms Tesla and SpaceX deleted after his ‘followers’ demanded he do it.
Musk had made fun of Sonos, a speaker brand, after it said it would suspend advertising on Facebook for a week, after news about the social network having allowed Cambridge Analytica, a UK-based political consulting firm, access and misuse data of 50 million users.
A #deletefacebook movement has emerged after accusations were levelled against Cambridge Analytica. And Musk’s ‘followers’ asked him have get the pages of Tesla and SpaceX deleted from Facebook.
Musk claimed he didn’t realise that his brand had a Facebook page. “Literally never seen it even once,” he claimed on Twitter, and promised – “Will be gone soon.” The pages of the two brands had a total of more than five million followers.
Of course, Musk and Mark Zuckerberg, the Facebook chief, have been having problems for the past few years. In 2016, for instance, after a new communications satellite of Facebook worth more than $200 million got destroyed following the rocket explosion at the SpaceX launch pad, a reporter tweeted: "@elonmusk blew up Mark Zuckerberg's satellite".
Musk was quick to reply: "Yeah, my fault for being an idiot. We did give them a free launch to make up for it and I think they had some insurance."
Undoubtedly these are exciting times for the ‘followers’ of these multi-billion-dollar barons, who apparently enjoy poking each other in the eye at every opportunity.
MORE REPORTS