Mahindra Group chairman Anand Mahindra has launched a proposal online to acquire Mumbai's iconic music store Rhythm House after the Enforcement Directorate (ED) attached it along with at least 20 other properties linked to fugitive jeweller Nirav Modi, collectively estimated to be worth Rs523.72 crore. 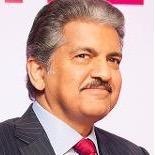 Nirav Modi had bought Rhythm House for Rs32 crore when it was shut down by Curmally family, the then owner of the building, as it had become unviable in an age of online music purchases. It was for decades a hang-out where one could buy the latest releases, especially of Western genres such as rock.

Modi absconded after of an alleged fraud of around Rs11,000 crore surfaced, in which the Punjab National Bank is heavily involved.

Anand Mahindra is a known music lover, having organised more than one blues event in the city. A much-loved genre among the cognoscenti, blues is the basis of much of the best rock and roll.

In a tweet, the business magnate suggested that ''a bunch'' of people could collectively acquire Rhythm House.

''If the ED is going to eventually auction Rhythm House, how about a bunch of us in Mumbai collectively acquiring it, restoring it & turning it into a performance venue for Rising musicians & a hangout for music lovers? Happy to be part of such a band…,'' Mahindra said.

Mahindra's tweet met with positive response from people in the film industry, the corporate world as well as citizens in general. Soon after he posted his idea on Twitter, Bollywood musician Vishal Dadlani called it ''much needed'' and wrote that he will ''happily chip in''.

''Sir, I'm in. I'll happily chip in, curate, organise management, and do whatever else is needed. It could be a centre for a whole new generation of music and musicians. Much needed,'' Dadlani tweeted.

The next response was from senior journalist Sidharth Bhatia, who also asked Mahindra to count him in.  Bhatia tweeted, ''Count me in, happy to be part of any initiative that keeps its original name and character. #RhythmHouse is part of the city's history and the area could do with a cultural centre.''

One of the Twitterati suggested that Mahindra ''start a crowdsourcing campaign for this,'' while others showed interest to be a part of the project.

Mahindra further tweeted, ''This should not be a project for only the rich. If we crowdsource, you ought to be able to participate at any level you can ... we'll have to figure out the structure, but it can surely be done...''