Rashtriya Janata DAL leader and former chief minister of Bihar Lalu Prasad Yadav has been sentenced to three and a half years in jail and a fine of Rs5 lakh in one of the cases related to the 1996 fodder scam. 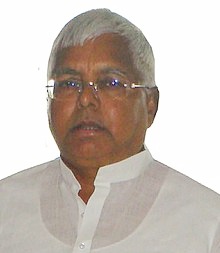 Lalu has been convicted in one of the cases of the fodder scam, wherein Rs900 crore from the Bihar exchequer was siphoned off under the pretext of purchasing fodder for livestock, during the '80s and '90s.

If Lalu fails to furnish the Rs5 lakh fine, his jail term would extend by six months, the court said.

Judge Shiv Pal Singh of the special CBI court in Ranchi had found Lalu Prasad and 14 others guilty, while seven accused, including former Bihar chief minister Jagannath Mishra, were acquitted on 23 December.

Earlier in the week, Prasad's advocate filed a plea before the court seeking minimum punishment for the party supremo on health grounds.

Prasad, in his plea, had denied any role in the scam and had sought leniency owing to his illness and age. "I have no role in this scam directly; consider minimum punishment keeping in view my age and health grounds."

His son Tej Pratap Yadav said, ''We are confident that Lalu-ji will get bail. We have full faith in the judiciary.

Apart from Lalu, others accused were present in the court when the quantum of sentence was pronounced. There were tight security arrangements outside the court.

Lalu Prasad will have to approach the High Court to apply for bail.