A special CBI court today convicted former Bihar chief minister and chief of the Rashtriya Janata Dal (RJD) Lalu Prasad Yadav and 15 others in a fodder scam case while acquitting six others, including another former chief minister Jagannath Mishra. 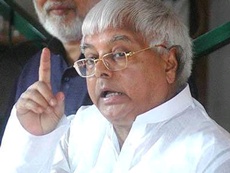 While the quantum of punishment will be pronounced on 3 January, Lalo Prasad and the other convicted have already been taken into custody and brought to Ranchi's Birsa Munda jail, CBI sources said.

Lalu has so far spent 375 days in jail in connection with the fodder scam, in five jail stints between 30 July 1997 and 27 January 2002, Mishra has been convicted and sentenced to five years of imprisonment in one of the five fodder scam cases.

CBI judge Shivpal Singh pronounced the verdict in the case pertaining to fraudulent withdrawal of Rs89.27 lakh from Deoghar Treasury between 1991 and 1994.

Lalu Prasad, the chief of RJD, and other convicts were taken into custody immediately after the pronouncement of the verdict.

The CBI had filed charges against 38 persons on 27 October 1997 in the fooder scam case. Eleven of them died and three turned approvers while two other accused confessed and were convicted in 2006-07, a CBI official said.

Lalu Prasad who arrived at the court along with his younger son, Tejashwi Yadav said he was confident of getting acquitted in the fodder scam case.

In what sounded like his supporters protesting against his conviction, the former Bihar chief minister urged people of Bihar to maintain "calm and peace" after the judgement is delivered.

"I have faith that I will get justice. Whatever is the judgment, I appeal to people of Bihar to maintain peace and law and order," Lalu Prasad said while interacting with the media here.

Earlier in the day, Prasad's son Tejashwi Yadav expressed confidence that his father will come out clean in the case and alleged that the entire matter was a part of the Bharatiya Janata Party's (BJP) propaganda to pull the RJD down.

"We trust the judiciary and hope the verdict will be in our favour. We hope that justice will prevail. Just like BJP's propaganda was busted in the 2G scam and Adarsh scam, a similar verdict will happen now," he said.

"We trust and respect the judiciary. We will not let BJP's conspiracies work," Lalu said, adding that he would get a clean chit in the fodder scam case like other accused in the 2G and Adarsh scams.

While the case in which Lalo was convicted relates to the alleged fraudulent withdrawal of Rs95 lakh from the Deoghar treasury, there are five fodder scam cases, involving more than Rs900 crore that was reportedly siphoned off from the Chaibasa treasury for two decades.

Altogether, there were 34 accused in the case, out of which 11 died during the course of the trial and one turned CBI approver and admitted the crime.