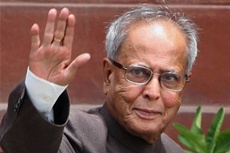 Mukherjee suggested this in the third part of his memoir 'The Coalition Years: 1996-2012', released on Friday.

And the man who pipped Pranab Mukherjee to become PM in 2004, Manmohan Singh, agreed, saying the former President was better qualified than him for the prime minister's post and the two had no serious differences on any matter during the UPA government.

Speaking at the release of his autobiography at a function at Teen Murti Bhawan in New Delhi, in the presence of former prime minister Manmohan Singh, Mukherjee was candid, when he said that he believed he could have been the Congress choice for the prime minister's post.

''I cannot claim to have the objectivity of a historian, which I am not. I am a party activist... I have tried to not bring my personal life, my family or any personal matter into the narrative,'' Mukherjee said.

Mukherjee's memoir is the third in the series. The other two are - The Dramatic Decade: The Indira Gandhi Years and The Turbulent Years: 1980-1996.

In the latest part of his autobiography, Mukherjee said he had a ''vague impression'' that Congress may project Manmohan Singh as its presidential candidate, leaving him to be the party's prime ministerial nominee for the 2014 general election.

''I thought that if she (Sonia Gandhi) selected (Manmohan) Singh for the presidential office, she may choose me as the prime minister. I had heard a rumour that she had given this formulation a serious thought while on a holiday in the Kaushambi Hills.

In the second part of his memoir, Mukherjee heaped praises on late Congress leader Sanjay Gandhi who has been a subject of intense criticism for his role during the Emergency. Mukherjee called the Congress leader the principal architect, along with his mother, of the party's victory in 1980 general elections. Excerpt:

''Sanjay Gandhi had played a crucial role in the elections. He had planned as well as executed a nationwide campaign and he worked hard to ensure the success of the party in the assembly elections. He revamped the organisational machinery in the states and, post the elections, hand-picked new chief ministers - ensuring that those who had stood by Mrs Gandhi during her days of crisis were suitably rewarded...

Post-Emergency literature tended to characterise Sanjay Gandhi as a villain. This animosity and venom against him was to a large extent the result of the euphoria surrounding the Janata Party's creation, a wave of anti-Mrs (Indira) Gandhi sentiment and the division within the Congress.

''Every human being is a mixture of good and bad. However, no one can fault the intentions guiding Sanjay's decisions --- whether these pertained to population control, tackling illiteracy or afforestation. His ideas were good, and all targeted at bringing about positive change. And, as someone who knew him well and worked with him for six years of his political life, I was privy to many of his positive virtues.''