If demonetisation is a bold step, so is suicide: Arun Shourie

Arun Shourie, a cabinet minister in the previous NDA government led by Atal Behari Vajpayee, on Tuesday launched a blistering attack on the Narendra Modi government, blaming it squarely for the current economic slowdown and terming demonetisation as the ''largest money-laundering scheme ever''. 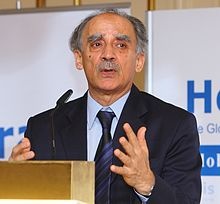 In an interview with NDTV, he likened the demonetisation of Rs1,000 and Rs500 notes last year to suicide, saying the latter too is "a bold step".

"Which argument (in favour of demonetisation) today survives? Black money? All of it turned white. Terrorism? Terrorists are still coming into India. At the end they have nothing to say," he said.

Shourie also questioned the government's rollout of the goods and services tax, saying that it was an important reform but was poorly implemented.

He said the government's decision to hold a midnight ceremony for the GST launch was event management. ''A tax reform is being compared to the independence of India,'' he said.

"Their core competence is event management. They are so self-satisfied with it. They are just briefing each other, not listening to others ... they are concerned about 300-feet statutes, bullet trains, etc," he said.

Shourie's attack comes soon after recent criticism of the government's economic policies by Yashwant Sinha, finance minister in the Vajpayee government, who wrote in a newspaper article criticising demonetisation and the messy GST rollout.

On BJP and government functionaries calling Sinha a "frustrated" person after he lashed out at the government, Shourie said it was "their standard operating procedure".

"Whenever they are confronted with inconvenient facts, they try to bury it in avalanche of abuse. I have a constructive suggestion for them. They should publish a list of persons in advance who they think are frustrated," he said.

"They are now in a sealed echo-chamber. They don't hear what is happening. The distress the RBI has documented of small and medium enterprise. These poor fellows had been clamouring and shouting. Nobody heard them," he added.

He said that persons like Yashwant Sinha, P Chidambaram (finance minister in the Manmohan Singh government) and several other economists have been "talking about facts".

Shourie, former disinvestment, communication and information technology minister in the previous NDA government headed by Atal Behari Vajpayee, and who has also been a former editor of The Indian Express, also attacked the government on the issue of freedom of the press.