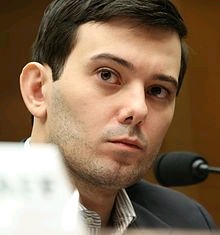 A US judge yesterday ordered Martin Shkreli, who is awaiting sentencing for securities fraud, to be jailed over a Facebook post in which he offered a $5,000 reward for a strand of Hillary Clinton's hair.

Shkreli, who is on a $5 million bail since his December 2015 arrest, remained silent and showed no emotion as US marshals led him out of US district judge Kiyo Matsumoto's Brooklyn courtroom.

Matsumoto ruled that Shkreli's 4 September post, made shortly before Clinton started on a book tour, showed he posed a danger to the public. Rejecting the arguments by Shkreli's lawyer, Benjamin Brafman, that the post was protected free speech, she said: ''This is a solicitation of assault in exchange for money,'' the judge said. ''That is not protected by the First Amendment.''

Matsumoto dismissed Brafman's repeated pleas to reconsider her decision, or at least give Shkreli until Monday to prove that he did not pose a danger.

''We are obviously disappointed,'' Brafman told reporters outside the courthouse. ''We believed that the court arrived at the wrong decision. But she's the judge, and right now we will have to live with this decision.''

Shkreli gained notoriety as a pharmaceutical executive for hiking the price of a lifesaving drug, Daraprim, by 5,000 per cent. ''Pharma Bro'' as Shkreli came to be known, faces conviction from an August ruling on three counts of fraud, relating to two hedge funds and a pharmaceutical company he previously ran. (See: Brooklyn jury finds price-gouger Martin Shkreli guilty of defrauding investors)

Though he will be sentenced in January, according to commentators, he most likely will not be released before then, unless his lawyers can show that he poses no threat to the community.

Shkreli's online offer last week prompted prosecutors to call for revocation of his bail and investigation by the Secret Service.