Manisha Singh, a prominent Indian-American lawyer, has been nominated to a key administrative position in the US State Department under President Donald Trump, which would put her in charge of the country's economic diplomacy, reports quoting sources at the US administration said. 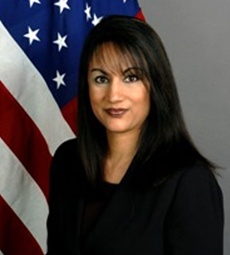 A report in the Hindustan Times, which quoted White House sources, said once confirmed by the Senate, Singh would become the assistant secretary of state for economic affairs, a post left vacant by Charles Rivkin who resigned following Trump's swearing-in as the 45th president of the United States.

She had served as the deputy assistant secretary of state in the Bureau of Economic, Energy and Business Affairs, and as an aide to the Senate Foreign Relations Committee.

Before working for the Congress, she was a practicing attorney at the law firms of Squire Sanders & Dempsey L.L.P. in the Corporate and Capital Markets group and Reed Smith LLP, where she represented privately held and publicly listed clients in domestic and cross border transactions.

She completed a Master of Laws (LLM) in International Legal Studies, with concentration in international trade, at the American University Washington College of Law. Simultaneously, she worked in the Office of General Counsel at the United States International Trade Commission.

After law school, she served as a judicial clerk to the Honorable Edward F Threadgill, Jr, then Chief Judge of the State of Florida Second District Court of Appeal.

She speaks fluent Hindi and conversational Spanish. She is admitted to practice law in Florida, the District of Columbia and Pennsylvania. She is a member of the South Asian Bar Association and a term member of the Council on Foreign Relations.