The Anti-Terrorism Court (ATC) hearing the Benazir Bhutto assassination case has declared former Pakistan president General (Retired) Pervez Musharraf, also a suspect in the case, an absconder for not appearing before the court. 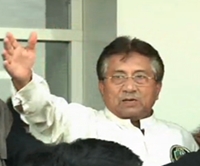 ATC judge Asghar Ali Khan allowed the militants from Tehreek-e-Taliban Pakistan (TTP) terror group to walk free. The TTP members Rafaqat Hussain, Husnain Gul, Sher Zaman, Aitzaz Shah and Abdul Rashid were arrested soon after the assassination and since then have been in jail.

Musharraf, who was accused of conspiring to kill Bhutto because he perceived her a potential threat to his rule, was declared an absconder for not appearing before the court and the judge ordered confiscation of his property.

The court, however, sentenced former Rawalpindi CPO deputy inspector general of police Saud Aziz and former Rawal Town Superintendent of Police Khurram Shahzad to 17 years imprisonment each. They were also ordered to pay a fine of Rs5 lakh each.

Both men were present in the courtroom when the verdict was pronounced and were taken into custody soon after.

Benazir Bhutto, the Pakistan People's Party (PPP) chief and two-time prime minister, was assassinated in a suicide attack in Rawalpindi's Liaquat Bagh on 27 December 2007 when she came out of park after addressing an election rally.

The court's verdict came after Federal Investigation Agency (FIA) Chief Prosecutor Mohammad Azhar Chaudhry in his concluding arguments had disowned prosecution evidence of audio record and transcript of telephonic conversation of the former chief of the banned Tehreek-i-Taliban Pakistan (TTP) with a cleric in which he had congratulated five terrorists on carrying out the successful attack on Bhutto.

He had claimed that Musharraf, through his aide former director general of the National Crisis Management Cell retired Brigadier Javed Iqbal Cheema, had disseminated the fake evidence to save himself.

Musharraf was accused of conspiring to kill Bhutto because he perceived her a potential threat to his rule.

During Wednesday's hearing, the FIA prosecutor also said the PPP leader Babar Awan was in Bhutto's backup vehicle, which was under the control of party leader Farhatullah Babar. He added that when the investigation was handed over to the FIA, the vehicle was recovered from Zardari House in Islamabad.

He said then president Gen (r) Musharraf's appearance before the court was excused as he had threats against his life from Al Qaeda.

''Of the 121 witnesses, statements of only 68 were recorded,'' he informed the court.

On Tuesday, suspects Hussain Gul and Rafaqat's legal counsel Jawad Khalid told the court that the statements received from his clients hold Musharraf, among others, responsible for the crime. He also claimed that there is no solid evidence against his clients. There is a conflict between investigating officers' statements and the weapons recovered from the crime scene, he added.

''This raises suspicion,'' he remarked, adding that the court should show mercy towards the innocent. ''The real culprits are not being punished for the crime,'' the counsel claimed.

FIA prosecutor Khawaja Asif accepted that there is no record of the suspects in the DNA report.

On the other hand, the lawyer of Aziz and Shehzad said that nobody can stop a suicide attacker but it can be investigated who facilitated the attacker.

The statements of those injured in the attack have yet to be recorded and the post mortem of the bodies was not done, the lawyer pointed out.

From the three SIMs which were seized, two were not registered in any citizen's name while the third SIM's ownership was not investigated, the court was informed.