Nitish Kumar has resigned as the chief minister of Bihar having failed to end a stand-off with scandal-hit alliance partner RJD, which ruled out the possibility of its candidate Tejashwi Yadav resigning as deputy chief minister. 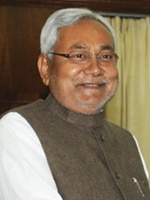 Minutes after chairing a meeting of JD(U) legislature party, Nitish is reported to have reached the Raj Bhawan, where he submitted his resignation letter to Governor Keshari Nath Tripathi.

Earlier, the RJD legislature party met in the state capital to discuss the ongoing rift with Nitish's JD(U). The party ruled out the possibility of Tejashwi resigning.

Addressing the press later Nitish said he was unable to tolerate the silence on the corruption charges and blamed the RJD for his decision to quit the government.

Meanwhile, at the RJD legislature party meeting to discuss the ongoing rift with Nitish's JD(U), party supremo Lalu Prasad Yadav ruled out the possibility of Tejashwi  Yadav resigning from the state cabinet. Lalu and his embattled son Tejashwi, went on to dismiss media reports which claim that Nitish has kept a non-negotiable demand of Tejashwi's resignation till the CBI drops charges against him.

''Nobody asked from my resignation,'' Tejashwi said. Instead, he accused the RSS and BJP of plotting the differences between the ruling alliance partners in Bihar.

''RSS-BJP wants to pull down our government in Bihar. They are conspiring the entire rift. But people of Bihar are seeing through their conspiracy,'' Tejashwi said.

The development comes weeks after the Central Bureau of Investigation (CBI) registered a corruption case against the RJD supremo, his wife Rabri Devi, son Tejashwi and former Indian Railway Catering and Tourism Corporation (IRCTC) managing director PK Goyal, and the wife of Lalu's confidante Prem Chand Gupta, Sujata on allegations of giving the tender for development, maintenance and operation of hotels in Ranchi and Puri in 2006.

Lalu had earlier rejected all the allegations against him and his family saying the CBI raids are 'politically motivated' and that filing an FIR cannot be the reason for Tejashwi's resignation.