NDA nominee Ram Nath Kovind was elected as the next President of India, with 522 of the 771 elected Members of Parliament voting in his favour and opposition candidate Meira Kumar receiving the backing of 225 MPs, after counting of voted ended in New Delhi in the evening today. 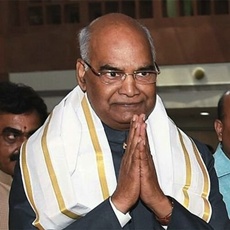 Kovind becomes the second Dalit leader and the first politician linked to the RSS to become President of India.

He received 65.65 per cent votes from lawmakers across the country, beating his opponent, Meira Kumar, former Lok Sabha speaker and Congress Party leader and also a Dalit, by a big margin.

Close to 99 per cent voting was recorded in the Presidential elections.

Polling was conducted in 32 polling stations, including the one in Parliament house, across the country. A total of 4,109 MLAs and 771 elected MPs were eligible to cast their ballot. While 4,083 MLAs voted, 768 MPs exercised their franchise.

Only a few months ago Ram Nath Kovind and his family were denied entry to the Retreat Residence of the President of India in Shimla. Kovind, who was the governor of Bihar at the time, was told to seek permission from the Rashtrapati Bhawan.

He quietly withdraw from the scene only to return as President and enter Rashtrapati Bhavan instead.

''Congratulations to Shri Ram Nath Kovind Ji on being elected the President of India! Best wishes for a fruitful & inspiring tenure.

''Gladdened by the extensive support for Shri Ram Nath Kovind Ji among MPs & across various states. I thank members of the electoral college,'' he said