It's Venkaiah Naidu vs Gopalakrishna Gandhi for vice president

Union minister M Venkaiah Naidu will take on Gopal Krishna Gandhi, the grandson of Mahatma Gandhi and the opposition's candidate, in the vice presidential election on 8 August. He is expected to submit his resignation as cabinet minister before filing the nomination today. 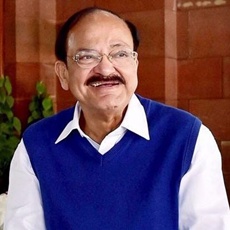 Naidu, who is in charge of information and broadcasting and urban development ministries, was selected as the ruling party's nominee for the presidential election at a parliamentary board meeting of the BJP on Monday evening, BJP president Amit Shah said.

The BJP-led ruling alliance, NDA, has a clear edge in the election for vice president, the second highest position after president.

With the exit of Naidu and former defence minister Manohar Parrikar and the demise of environment minister Anil Dave, Prime Minister Narendra Modi is expected to go for a cabinet revamp soon.

Reports quoting sources close to Naidu said he ''was not very excited'' and would have preferred to remain in active politics. It was the party's decision that a candidate from the South as vice-president will make the government more representative. Also, Venkiah Naidu has the required parliamentary experience to chair the Rajya Sabha as vice president.

Naidu is reported to have told one of his close friends that he wanted to be an ''active politician'' till his end. ''He felt that becoming vice-president would be the end of his political career. He wanted to remain the voice of Prime Minister Modi and play a key role in making his 'dream India' a reality. He has conveyed it to the Prime Minister also,'' said sources.

Naidu's name was doing the rounds even for the presidential election as well. But, Modi is reported to have then told Naidu that he would not like to ''spare'' any of his senior cabinet colleagues.

However, BJP president Amit Shah is reported to have later told Naidu that the prime minister would talk to him on the issue and that he should not refuse the offer.

Members from both Houses of Parliament form the electoral college for the vice presidential election.

Obviously, BJP's concern over managing the Rajya Sabha weighed in favour of Naidu. Rajya Sabha has a number political heavyweights from the opposition and Modi and Shah decided to choose an experienced man of stature with flexibility and pragmatism to conduct the House smoothly, say sources.

The vice president serves as chairman of Rajya Sabha, the upper House, where the NDA is currently in a minority and an NDA man as its chair is of greater import to the party than the choice of President who is more of a figurehead.