Syed Salahuddin, recently designated 'global terrorist' by the US, on Sunday boasted to a Pakistani television channel that he and his outfit Hizbul Mujahideen have carried out terror attacks in India. 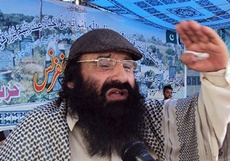 "Till now our focus was on Indian occupation forces. All the operations that we have done or are under way, we focus only on the installations of these occupational forces," Salahuddin said in an interview with Geo TV, referring to Indian armed forces in Kashmir.

Earlier on Saturday, Salahuddin reportedly told a rally in Muzaffarabad in Pakistan-Occupied Kashmir that his "fighters' attacks were on legitimate military targets as opposed to civilians", reported Pakistani newspaper The Nation.

Salahuddin had last year threatened to turn the Kashmir Valley "into a graveyard for Indian forces".

At the Saturday rally, Salahuddin called US President Donald Trump "crazy" and ''idiotic'' for dubbing him a global terrorist. He also said it was "a gift to (Indian Prime Minister Narendra) Modi".

According to US legal provisions, individuals named global terrorists are those "who have committed, or pose a significant risk of committing, acts of terrorism that threaten the security of US nationals or the national security, foreign policy, or economy of the United States", said a State Department notification.

"Donald Trump's decision will be thrown out if anyone challenges it in American courts. No other Western nation has endorsed what this crazy Donald Trump has done," Salahuddin said at the rally in Muzaffarabad.

"This (the Trump administration's) idiocy can neither weaken our courage, nor stop the freedom struggle and the target-oriented actions of freedom fighters," Salahuddin added.

Immediately after the US decision on Salahuddin, India said it was vindicated by the action.

"It vindicates India's longstanding position that cross-border terrorism is behind the crisis created in Kashmir, especially since last year. It underlines strongly the fact that both India and the US face the threat of terrorism and are working together to counter this threat. Terrorism knows no boundaries," said external affairs ministry spokesman Gopal Baglay minutes after news of the state department's notification.

The state department's notification said that under Salahuddin's tenure as a senior Hizb leader, the group "has claimed responsibility for several attacks" including the April 2014 explosives attack in Kashmir, which injured 17 people. He has also time and again "vowed to block any peaceful resolution to the Kashmir conflict" and "threatened to train more Kashmiri suicide bombers", the state department said.

The US state department's notification specifies that all Americans are now "generally prohibited from engaging in transactions with Salahuddin and all of Salahuddin's property and interests in property subject to United States jurisdiction are blocked."