Indians in general need no convincing that they are a cut above others in mental acumen, which, they will tell you, is why they do so well when they go abroad. As if to underline this belief, an 11-year-old boy of Indian origin living in the UK has scored an incredible 162 in the prestigious Mensa IQ test, two points higher than science geniuses Albert Einstein and Stephen Hawking. 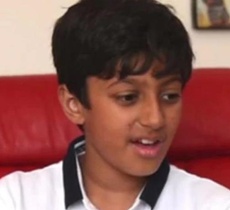 Arnav Sharma, from Reading town in southern England, passed the infamously difficult test a few weeks back, reportedly with zero preparation. A Mensa test result of 140 or more indicates the mental level of a genius, and 162 is the maximum result one can achieve in the paper, and puts Arnav in the top 1 per cent in the UK in terms of IQ.

Arnav has scored higher than German-born theoretical physicist Einstein and celebrated British cosmologist Hawking – and claims to have appeared for the test with zero preparation, having never seen what the paper looked like before taking it.

Sharma told The Independent newspaper, "I had no preparation at all for the exam but I was not nervous. My family were surprised but they were also very happy when I told them about the result."

The boy's mother, Meesha Dhamija Sharma, said she kept her "fingers crossed" during his exam.

"I was thinking what is going to happen because you never know and he had never seen what a Mensa paper looks like," she said.

Sharma said his hobbies are coding, badminton, piano, swimming and reading. He also has unusually good geographical knowledge and can name all the capitals of the world.

A spokesperson for Mensa praised the 11-year-old boy, saying, "It is a high mark which only a small percentage of people in the country will achieve."

Mensa was founded in 1946 in Oxford by Lancelot Lionel Ware, a scientist and lawyer, and Roland Berrill, an Australian barrister, but the organisation later spread around the world.  Its mission is to "identify and foster human intelligence for the benefit of humanity".

The Mensa Club is considered one of the most exclusive of clubs in the world. The only way to become a member it is to prove that one's IQ of one is in the top two per cent of the population.

According to mother Meesha Dhamija Sharma, the first time she was told about the exceptional mind of the child was when he was just one-and-a-half years old.

On his visit to India, his grandmother told Meesha he is going to do very well in his studies. At first, she did not believe her and thought she was saying that to make her happy.

But later she realised that the grandmother was right when at the age of two-and-a-half years, the boy learned to count up to more than 100.