More than a month after the Supreme Court sentenced him to six months imprisonment for contempt of court, former Calcutta High Court judge C S Karnan was arrested Tuesday night by the West Bengal Criminal Investigation Department along with the Tamil Nadu police from a guest house in Coimbatore, Tamil Nadu. 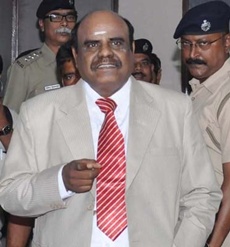 He was arrested after failing to get interim bail from Supreme Court, which refused to entertain his plea for relief.

The Supreme Court vacation bench of Justices D Y Chandrachud and Sanjay Kishan Kaul said that since orders for his arrest were passed by a seven-judge bench of the apex court, and another other bench could not suspend the order.

The bench asked Karnan to approach Chief Justice of India for any interim relief.

The hunt that began on 9 May for the errant judge (since retired on 30 June) ended when police took him into custody from a resort at Malumichampatti near Coimbatore, between Podanur and Madukkarai. Police sources confirmed that he was being taken to Chennai by a late night flight.

''Justice Karnan has been arrested. He will be brought to Kolkata via Chennai tomorrow morning and he will be put in Presidency Jail,'' Additional Director General (CID) Rajesh Kumar told the media.

Sixty-two-year-old Karnan, who retired on 12 June, had been evading arrest ever since the 9 May Supreme Court order - the first of its kind against a serving high court judge (See: SC sentences Justice Karnan to 6 months' jail for contempt).

Police said he was traced to a guest house attached to a private educational institution at Malumichampatti. He apparently tried to resist arrest when the officers landed there.

The process of arrest proved to be difficult, reports said, with the ex-judge threatening the police team with legal consequences, though the team said they were there to implement the order of the Supreme Court.

Coimbatore Rural police teams led by Superintendent of Police R V Ramya Bharathi assisted in the operation. There was a legal consultation on whether a prisoner transit warrant was required for transporting him out of Coimbatore.

Earlier, Karnan is suspected to have stayed at a private resort at Panangadu in Kochi from 11 to 14 June. The management of the Panangadu resort claimed they had no idea about his identity.

They said that three persons had occupied a room on 11 June and the booking was made in the name of A M Raj of Choodi Amman Street, Chennai. Only two persons ventured out of the room while the third never came out during the four days of stay at the resort, they said.

Last month, a seven-judge bench of the Supreme Court, headed by Chief Justice of India J S Khehar, had asked the West Bengal police to take Karnan into custody after he had been at loggerheads with the Supreme Court for several months. The bench also barred the media from publishing or reporting the orders passed by Karnan.

Following the order, Karnan tried to get relief from the top court but failed. The Supreme Court refused to hear his plea seeking a stay on its jail term order.