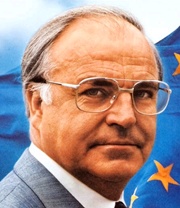 Helmut Kohl, the German chancellor credited with reuniting a nation divided by the Cold War and reestablishing Germany as leader of a united Europe, died on Friday at his home in Ludwigshafen. He was 87.

During the 16 years at the country's helm from 1982 to 1998 - first as Chancellor of West Germany and then as leader of a united Germany - Kohl also relentlessly pursued his dream of European unity. Kohl's legacy includes the common euro currency-now used by 19 nations-that bound Europe more closely together than ever before.

The longest-serving chancellor since Bismarck, Kohl, despite his hardliner reputation and huge physique, however, did not foresee the Russians backing off without much resistance, facilitating German reunification.

Helmut Kohl was one of a trio of dominant western conservative politicians along with Ronald Reagan and Margaret Thatcher whose concerted efforts helped change the course of history by ending Cold War politics.

But, unlike other great leaders, Khol had built close friendships with other world leaders, which in turn helped him persuade leaders of both anti-communist West and the communist East to back reunification of Germany.

The fall of the German wall in November 1989 opened a new era in European politics, and as the chasm between West and East Europe melted, European unification also became a possibility.

''A life has ended and the person who lived it will go down in history'' said German Chancellor Angela Merkel, speaking from Rome. ''It will take some time, however, until we can truly judge what we have lost in him. Helmut Kohl was a great German and a great European.''

''When a new spirit began to sweep through Eastern Europe in the 1980s, when freedom was won in Poland, when brave people in Leipzig, East Berlin and elsewhere in East Germany staged a peaceful revolution, Helmut Kohl was the right person at the right time,'' said Merkel. ''He held fast to the dream and goal of a united Germany, even as others wavered.''

Former US President George HW Bush said the world had lost ''a true friend of freedom.''

''Working closely with my very good friend to help achieve a peaceful end to the Cold War and the unification of Germany within NATO will remain one of the great joys of my life,'' Bush said. ''Throughout our endeavors, Helmut was a rock - both steady and strong.''

President Donald Trump said Kohl was ''a friend and ally to the United States as he led the Federal Republic of Germany through 16 pivotal years. He was not only the father of German reunification, but also an advocate for Europe and the trans-Atlantic relationship.''

''The world has benefited from his vision and efforts. His legacy will live on,'' he said in a statement.

Russian President Vladimir Putin credited Kohl with ''playing a key role in putting an end to the Cold War and with the reunification of Germany.''