Google co-founder Sergey Brin is building a huge blimp, which will be the biggest aircraft in the world when completed, The Guardian reported. Brin, who is known to be fascinated with air travel, will spend $100 million and $150 million to build the aircraft. 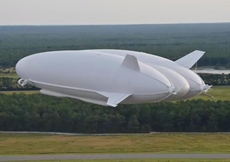 Bloomberg, which was the first to report on the development, said the mammoth blimp was under construction at a giant hangar in the Nasa Ames airfield near Google headquarters in Mountain View, California.

Google had signed a 60-year lease for $1.1 billion in 2014, through a subsidiary called Planetary Ventures (See: Google's Planetary Ventures takes control of NASA's Moffett Federal Airfield on lease), and was working with an engineer named Alan Weston, employed by a company controlled by Brin's family known as LTA ("lighter than air") Research and Exploration.

The blimp will measure 200 meters (656 feet) in length, according to The Guardian, and will go on humanitarian missions to remote locations as well also serve as an "air yacht."

The report quoted sources as saying the ship was being personally funded by Brin at an estimated cost of over $100 million. The blimp was expected to be massive in both scale and grandeur measuring around 200 meters in length.

Though that was not as big as the Hindenburg, which was 245 meters long, it would be among the biggest aircraft flying the skies today, and possibly the biggest.

According to the sources Brin planned to use it to bring humanitarian food and supplies to remote places across the world. They also expect him to use it as a luxurious "air yacht" for himself, his family and friends to enjoy, according to the report.

The unit he heads at Alphabet is working on all kinds of aircraft, including balloon type crafts.

Brin is the 'executive champion' of what was earlier known as GoogleX, and now is simply X.