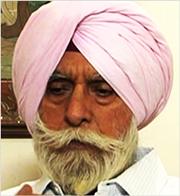 Kanwar Pal Singh Gill, the supercop who is credited with ending the Khalistan insurgency in Punjab in the 1980s, passed away early in the day at Delhi's Sir Ganga Ram Hospital. He was 83.

KPS Gill, as he was popularly known, was suffering from end-stage kidney failure and his end came from a cardiac arrest, said doctors attending to him.

Gill also was suffering from "significant" Ischaemic heart disease, and was recovering from peritonitis, he added.

Prime Minister Narendra Modi condoled his death. "KPS Gill will be remembered for his service to our nation in the fields of policing and security. Pained by his demise. My condolences," Modi tweeted after coming to know of Gill's death.

Union home minister Rajnath Singh condoled the passing away of former Director General of Police, Punjab, KPS Gill. Singh said he was saddened to learn of KPS Gill's demise. ''Gill is known for his bravery and courage and he always inspired others by leading from the front,'' he said.

The home minister offered his heartfelt condolences to the bereaved family of KPS Gill. ''May God give them strength to bear this loss'', Singh said.

Punjab had been in the grip of bloody militancy when Gill had taken over as director general of police (DGP) of the state in 1984. It was his efforts that saw the controlling - if not the end - of one of the bloodiest chapters in the history of the state, which had possibly not seen such turmoil since the Partition that came with India's Independence since 1984.

His appointment had almost coincided with the assassination of then Prime Minister Indira Gandhi by her Sikh bodyguards Beant Singh and Satwant Singh in 1984. That had resulted in massive anti-Sikh riots in northern India, cases pertaining to which are still being heard in Supreme Court.

The Khalistan movement, which had received a jolt following the Indian Army raid of the Harmandir Sahib Gurudwara - alternately known as the Golden Temple - in Amritsar, had resurfaced with greater vigour after her death. But Gill had managed to effectively deal with that uprising.

KPS Gill, who joined the police force in 1958, received the nickname of "supercop" as a result of his work from 1984 to 1990. With 1991 turning out to be even more violent as the insurgency peaked, he was chosen as the chief of Punjab Police, and given the aid of Indian Army. By 1993, reports said the masses no longer lived in fear of the insurgency.

Gill, however, had a couple of blots on his record, the primary among them being claims that he and the Punjab Police under him denied basic human rights to many insurgents, besides illegally detaining many youngsters linking them to the insurgency.

Gill was also convicted of sexual assault because he "patted" the derriere of an IAS officer while in an inebriated state at a party.