Donald Trump has a ''dangerous mental illness'' and is not fit to lead the US, a group of psychiatrists warned during a conference at Yale University. 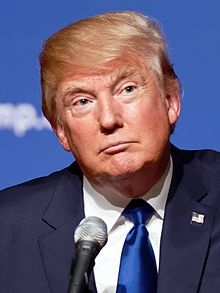 Mental health experts claimed the President was ''paranoid and delusional'', and said it was their ''ethical responsibility'' to warn the American public about the ''dangers'' Trump's psychological state poses to the country.

Speaking at the conference at Yale's School of Medicine on Thursday, one of the mental health professionals, Dr John Gartner, a practising psychotherapist who advised psychiatric residents at Johns Hopkins University Medical School, said, ''We have an ethical responsibility to warn the public about Donald Trump's dangerous mental illness.''

Dr Gartner, who is also a founding member of Duty to Warn, an organisation of several dozen mental health professionals who think Trump is mentally unfit to be president, said the President's statement about having the largest crowd at an inauguration was just one of many that served as warnings of a larger problem.

''Worse than just being a liar or a narcissist, in addition he is paranoid, delusional and grandiose-thinking and he proved that to the country the first day he was President. If Donald Trump really believes he had the largest crowd size in history, that's delusional,'' he said.

Chairing the event, Dr Bandy Lee, assistant clinical professor in the Yale Department of Psychiatry, said, ''As some prominent psychiatrists have noted, [Trump's mental health] is the elephant in the room. I think the public is really starting to catch on and widely talk about this now.''

James Gilligan, a psychiatrist and professor at New York University, told the conference he had worked with some of the ''most dangerous people in society'', including murderers and rapists - but that he was convinced by the ''dangerousness'' of Trump.

''I've worked with some of the most dangerous people our society produces, directing mental health programmes in prisons,'' he said.

''I've worked with murderers and rapists. I can recognise dangerousness from a mile away. You don't have to be an expert on dangerousness or spend fifty years studying it like I have in order to know how dangerous this man is.''

Dr Gartner started an online petition earlier this year on calling for Trump to be removed from office, which claims that he is ''psychologically incapable of competently discharging the duties of President''. The petition has so far garnered more than 41,000 signatures.

It states, ''We, the undersigned mental health professionals (please state your degree), believe in our professional judgment that Donald Trump manifests a serious mental illness that renders him psychologically incapable of competently discharging the duties of President of the United States.

''And we respectfully request he be removed from office, according to Article 4 of the 25th Amendment to the Constitution, which states that the president will be replaced if he is 'unable to discharge the powers and duties of his office'."

The claims made in the conference have drawn criticism from some in the psychiatric establishment, who say they violate the American Psychiatric Association's ''Goldwater rule'', which states psychiatrists are not to give professional opinions on people they have not personally examined.

They have also been condemned by Republicans, including Connecticut Republican Party Chairman J R Romano, who accused the group of ''throwing ethical standards out the window because they cannot accept the election results''.

Responding to the criticism, Dr Gartner said, ''This notion that you need to personally interview someone to form a diagnosis actually doesn't make a whole lot of sense. For one thing, research shows that the psychiatric interview is the least statistically reliable way to make a diagnosis.''

A spokesperson for Yale University told The Independent, the panel at the conference abided by the Goldwater rule during the discussions, but that the organiser was "troubled" by the "silencing of debate".

''The panel at Yale School of Medicine abided by the 'Goldwater rule'. Eminent psychiatrists were invited to speak about whether there are other ethical rules that override it, as in ordinary practise," said the spokesperson.

"The organiser, Dr Bandy Lee, agrees with the Goldwater rule but is troubled by its recent expansion (as of 16 March 2017) and the silencing of debate. She hopes that the public and politicians will understand that mental health issues are not to be used as a weapon, just as other health issues are not.

"Dr Gartner was invited as an activist and was not on the actual panel. The organiser emphasises that the event was independently organised and did not represent the views of Yale University or Yale School of Medicine.''

The doctors have said that even if it is in breach of traditional ethical standards of psychiatry, it was necessary to break their silence on the matter because they feared ''too much is at stake''.

It is not the first time Trump's mental health has been called into question. In February, Duty to Warn, which consists of psychiatrists, psychologists and social workers, signed an open letter warning that his mental state ''makes him incapable of serving safely as president''.

The letter warned that the President's tendency to ''distort reality'' to fit his ''personal myth of greatness'' and attack those who challenge him with facts was likely to increase in a position of power.

Earlier in December three professors of psychiatry, including one from the Harvard Medical School, asked Obama, in a letter, to order a "full medical and neuropsychiatric evaluation" of Trump before the President-elect took the official seat in the White House on 20 January 2017. (See:  Psychiatry professors urge Obama to order Trump's medical examination)> http://www.domain-b.com/people/in_the_news/20161220_barack_obama.html