The Enforcement Directorate has issued a show-cause notice to Karti Chidambaram and a company purportedly linked to him for alleged violations of the Foreign Exchange Management Act (FEMA) to the tune of Rs45 crore. 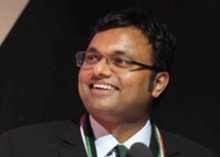 The agency also issued a similar notice in the case to Chennai-based Vasan Health Care for alleged FEMA violation of more than Rs2,100 crore.

Son of senior Congress leader P Chidambaram, Karti said, ''The more my father speaks up, the more I am targeted.''

Former union finance minister P Chidambaram asserted that the government could not "silence my voice or stop my writing" with "baseless allegations".

"The Enforcement Directorate has the habit of recycling allegations from time to time. Today's (Monday) press release by the ED is another example. The allegations in the press release are baseless, totally false and ridiculous," Chidambaram said.

"No notice has been served to Karti Chidambaram so far. If a notice is received, a suitable reply will be sent. By targeting Karti Chidambaram with baseless notices, the government cannot silence my voice or stop my writing," he added.

The ED alleged that the FEMA violations were made while infusing foreign investment in the eyecare chain through venture capital firms such as Sequoia Capital and WestBridge Capital. The ED called into question the investments made by these companies in Vasan Health Care on the ground that shares were not bought directly from the company but through its promoter A M Arun.

It also questioned the companies buying overpriced shares from Advantage Strategic, where Karti Chidambaram was once a director.

''Show-cause notice has been issued to M/s Vasan Health Care Private Limited, its promoter director Shri Arun, Smt Arun, Shri Dwarakanathan and also to the overseas investors for the alleged contraventions  show-cause notice has been issued to M/s Advantage Strategic Consulting Pvt Ltd, its directors and also to Shri Karti P Chidambaram who appears to be the controller and ultimate beneficiary in these transactions,'' an ED statement said.

In January, Karti Chidambaram, in an email response to The Indian Express, had said, ''Sequoia and Westbridge are to my knowledge well acclaimed global PE/VC funds. I have had no business transactions with either of them. The ED is on a fishing and roving exercise to harass and defame me. All this is an unfortunate fallout of this toxic game.''

The ED said it was also probing P Chidambaram for granting FIPB approval in the Aircel-Maxis case. ''Further investigations under PMLA are going on in respect of FIPB approval given to Aircel-Maxis by the then Finance Minister wherein foreign inflow was Rs3,500 crore (appx) whereas as per Govt policy and FIPB guidelines, competent authority was CCEA (Cabinet Committee of Economic Affairs) for any inflow above `600 crore,'' the ED statement said.

In a statement earlier this month, P Chidambaram said he had granted approval to the Aircel-Maxis deal ''in the normal course of business''.

The ED said it conducted investigations into foreign investments received by Vasan Health Care, a leading eyecare chain with its headquarters in Chennai, both in the primary market as well as secondary market, on the basis of inputs received by them about suspected contraventions under FEMA.

''Preliminary investigation revealed that the said company had received investments from the funds of Sequoia and WestBridge, based at Mauritius, and also through investment arms of M/s GIC, Singapore,'' the ED statement said.

According to the ED notice, the overseas investors acquired shares of Vasan Health Care by acquiring compulsorily convertible preference shares (CCPS) directly from the company by investing a total amount of Rs432 crore in different rounds of investments from February 2009 to November 2014. The shares were acquired by the overseas investors at the face value of Rs100 each, the ED notice stated.

''In addition, the overseas investors, instead of acquiring equity shares from the company directly, which would have added more liquidity to the company, chose to acquire the same in the secondary market viz., from the existing shareholders of the company including its promoter Shri AM Arun, M/s AMA Associates (a partnership firm belonging to the promoter Shri A M Arun and his father-in-law Shri Dwarakanathan) and M/s Advantage Strategic Consulting P Limited, a company whose activities are found to be in the control of Shri Karti P Chidambaram,'' the ED statement said.

One of the overseas investor of the Sequoia Group who invested in the CCPS of Vasan in the first round of investment in February 2009 sold a stake worth around Rs25 crore in March 2012 to one of the investment arm of GIC Singapore for Rs177.40 crore, getting a return of more than seven times of their investment, the ED said.

''Mrs Arun, promoter of M/s Vasan who was allotted equity shares of face value of Rs 100 each on payment of premium of Rs 100 transferred 300,000 equity shares to her father Shri Dwarakanathan without receiving any consideration. Shri Arun immediately organised the transfer of 150,000 shares from Dwarakanathan to M/s Advantage Strategic Consulting P Limited, who were never connected to the activities of the company till that date. Although the shares had a total face value of `1.50 crore and was acquired by the original allottee for Rs3 crore, which included a premium of `1.50 crore, M/s Advantage Strategic Consulting P Limited, paid to the transferor Shri Dwarakanathan `50 lakh only and that too after a period of more than one year from the date of transfer of shares,'' the ED statement said.

According to ED, Dr Arun, while negotiating with the overseas investors in selling his stake, also facilitated and ensured that shares held by Advantage are also sold. Of the 150,000 shares, Advantage sold 30,000 shares to one of the investors from the Sequoia group and received consideration of around Rs 22.50 crore, the ED said.

''It was only after the receipt of the consideration, they transferred the remaining amount of Rs 1 crore to Dwarakanathan,'' the ED statement said.

''During the investigation it was revealed that various agreements were entered from time to time between the company, promoters, investors, seller of shares etc. The CCPS were issued to the overseas investors wherein the price/conversion formula have not been determined upfront at the time of issuance of the shares. Further, as per the agreements, the overseas investors were given assurance of the returns in one form or other. Such assurance of returns and non-determination of the price/conversion formula upfront are not permitted and are in contravention of FEMA,'' the ED statement said.

The ED alleged that Vasan had not followed statutory obligations as envisaged under FEMA, 1999, in its reporting mechanism to the Reserve Bank of India and failure on its part also resulted in contravention of FEMA.

''The total amount of contravention identified to have been committed by M/s Vasan Health Care Private Limited and its overseas investors on different counts in the investments received from overseas investors is around Rs2,100 crore,'' the ED statement said.