It's official, Ivanka Trump to get White House office 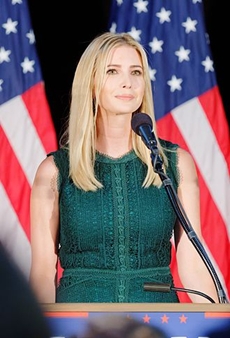 ''I have heard the concerns some have with my advising the President in my personal capacity while voluntarily complying with all ethics rules, and I will instead serve as an unpaid employee in the White House Office, subject to all of the same rules as other federal employees,'' Ivanka Trump said in a statement on Wednesday.

''Throughout this process I have been working closely and in good faith with the White House Counsel and my personal counsel to address the unprecedented nature of my role.''

Ivanka Trump doesn't plan to divest herself of her brand of clothing and accessories as part of her compliance with ethics standards, said Jamie Gorelick, her attorney at law firm WilmerHale.

''Her compliance with ethics rules will be the same as they have been,'' Gorelick said. ''You can hold an asset if you recuse from particular matters.''

Larry Noble, general counsel of the Campaign Legal Center, which advocates stricter controls on money in politics, told Bloomberg the decision not to divest was troubling. Recusal, he said, is limited to those with decision-making authority. That means Ivanka Trump would have more latitude to participate in matters in which her role is to advise, he said.

''There's still the core issue of whether she's going to be involved in things that can affect her family's business,'' Noble said. Her ethics arrangements provide a ''very weak, porous wall'' between her and her business, he said.

The US Office of Government Ethics is in charge of evaluating federal employees' plans for avoiding ethical conflicts - though the agency's authority is limited in the case of White House staff members, said Craig Holman, a government affairs lobbyist for Public Citizen, a left-leaning government-watchdog group in Washington.

''If OGE determines that a financial stake truly poses a conflict of interest, you really do have to divest,'' Holman said. But while he said he thought the ethics agency would recommend she sell the asset, he added, ''They're not in position to do much to enforce it.''

That power rests with the White House Counsel, Holman said.

Ivanka Trump announced in January that she was handing day-to-day management of her brand to top lieutenant Abigail Klem. A closely held company licenses her name to vendors that make goods, including a $100 million apparel line made by G-III Apparel Group, as well as shoes and accessories. She has transferred the company's assets to a new trust overseen by relatives of her husband, Jared Kushner, but she has retained ownership and receives payouts.

Ivanka Trump's statement on Wednesday came just hours after Democratic Senators Elizabeth Warren and Tom Carper released a letter to the federal ethics office, asking whether the White House sought the agency's guidance on the first daughter's position. The letter followed news reports that Ivanka Trump was being given a West Wing office and security clearance without a specified official role in the administration.

The senators also asked what the consequences would be if Ivanka Trump violated rules that apply to regular full-time employees and what financial disclosures she would be required to make.

''We are pleased that Ivanka Trump has chosen to take this step in her unprecedented role as First Daughter and in support of the President,'' the White House said in a statement Wednesday. ''Ivanka's service as an unpaid employee furthers our commitment to ethics, transparency, and compliance and affords her increased opportunities to lead initiatives driving real policy benefits for the American public that would not have been available to her previously.''

Instances of family members - particularly children - of presidents serving in the administration are rare, and unprecedented under modern ethics standards. According to Barbara Perry, director of presidential studies at the University of Virginia, Ivanka Trump would be the first child of a president to hold an official White House post since Dwight Eisenhower's son John.

Still, the role of a First Lady traditionally involves advising the president, and typically comes with an office and budget, said Stan Brand, an attorney and government-ethics expert at Akin Gump Strauss Hauer & Feld LLP. ''I don't know that first daughters have any special status,'' he said.

Ivanka Trump, who served as a top executive in the Trump organisation in addition to running her own business, was a key adviser to her father's presidential campaign. Following the election, her presence at meetings with her father and Japanese Prime Minister Shinzo Abe garnered criticism. She has also met with German Chancellor Angela Merkel during a visit to Washington this month. Her husband, Kushner, also serves officially as a top White House adviser.

Some of Ivanka Trump's business ventures have raised questions. This winter, following calls for boycotts by anti-Trump activists, her branded products started vanishing from such stores as Nordstrom, Neiman Marcus and ShopStyle. In February, Nordstrom confirmed it would stop selling the first daughter's line, although it cited poor sales rather than politics.

The president responded in a tweet that his daughter was being treated ''so unfairly''.

Kellyanne Conway, another top White House official, then defended Ivanka Trump in a television appearance, delivering what she called ''a free commercial''. Conway was counselled for her actions, which appeared to have violated the ban on executive branch employees endorsing products, White House spokesman Sean Spicer said.