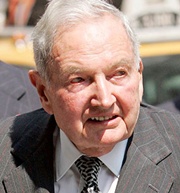 David Rockefeller, the banker and philanthropist who controlled Chase Manhattan bank for over a decade died last morning at his home in Pocantico Hills, New York at the age of 101.

Chase Manhattan came to be known as Rockefeller bank, although the family never owned more than 5 per cent of its shares. Rockefeller was more than a steward and as chief executive throughout the 1970s, he expanded the lender's operations internationally.

His stature, however, was much greater than that of a business tycoon, and his influence extended beyond Washington and foreign capitals, in the corridors of New York City government, in art museums, in great universities and in public schools.

According to commentators, Rockefeller could well be the last of an increasingly less visible family to play a role on the world stage. During his travels across the world he was accorded the honours reserved for chiefs of states in visiting countries.

He was the last surviving grandson of John D Rockefeller, the tycoon who founded the Standard Oil Company in the 19th century and built a fortune that made him the first US billionaire and his family one of the richest and most powerful in the nation's history.

According to commentators, David Rockefeller, more keenly perhaps than any other of John D's five grandsons, had always striven to perform in a way that he would describe as "appropriate"-that would bring credit to the Rockefeller name and support the proposition that the family's power was being usefully channeled.

While he had succeeded splendidly in a sense in this, as a world-renowned figure, and the US' leading business statesman, yet in another sense, Rockefeller could be said to have failed to deliver. Chase Manhattan Corp, of which Rockefeller was chairman, and whose principal unit had come to be so closely linked with him that it was sometimes called "David's bank," had in recent years had a totally "inappropriate" record.