Whether you're a devoted member of the Grab Your Wallet boycott of Ivanka Trump or you're enthusiastically buying her goods, chances are you already know that many of the Trump family's products are made overseas. 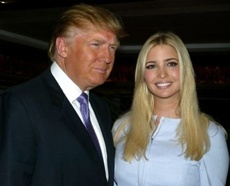 But it has now emerged that even as President Donald Trump promised to create jobs by following ''two simple rules: Buy American and hire American'' in his January inauguration speech, huge shipments of his daughter's line were reportedly on the way to the US from China.

More than 53.5 metric tons of Ivanka Trump-branded shoes, bags, and clothes were sailing to American ports in eight shipments ''even as he spoke'', according to customs receipts obtained by French news organization Agence France-Presse.

President Trump promised to bring more factory jobs to this country and accused China of stealing manufacturing work. But at least one shipment per business day of Ivanka Trump's shoes and other offerings continues to be sent from China, according to the AFP investigation, and the Global Times reported last month that a Chinese factory has already received an order for 10,000 Ivanka Trump shoes for next season.

In fact, ''almost all of her goods are made overseas'', according to The New York Times. The paper reported back in December 2016 that the brand outsources internationally to avoid ''costly and impractical'' factors involved with manufacturing in the United States.

Ivanka Trump admitted in an interview that she ''didn't have any experience in production and manufacturing'', describing herself as an entrepreneur rather than a fashion designer. Her imported goods tracked by AFP were licensed by three different US companies; one declined comment to the agency while the others didn't respond. A request for comment from The Huffington Post to the first daughter's company was not immediately returned.

Donald Trump's own products are made in countries including India, China and Mexico. In 2012 he famously told David Letterman his ties and shirts were made ''some place'', only to be pointedly reminded by the former late night host that they are, in fact, made in China and Bangladesh.

In 2015, Trump defended this practice, saying in a CNN interview that it's ''not at all'' hypocritical to outsource his ties, ''because [China] manipulated their currency to such a point that it's impossible for our companies to compete''.

Perhaps someone should remind him that, as with all steps toward a goal, change starts at home.