Sasikala Natarajan's palace dreams ended today with the Supreme Court convicting her in the disproportionate assets case. The newly-elected general secretary of All India Anna Dravida Munnetra Kazhagam (AIADMK) and an unrelenting claimant for the Tamil Nadu chief minister's post, will now go to jail instead. 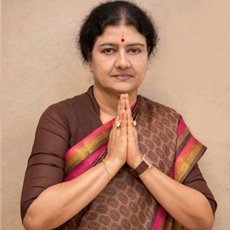 Sasikala, accused number two along with prime late Tamil Nadu chief minister and AIADMK supremo J Jayalalithaa in the 20-year-old corruption case, has been sentenced to four years in prison and asked to surrender immediately.

This means Sasikala cannot contest elections for the next 10 years from now. She will serve her remaining jail sentence of three years and six months as she has already served almost six months earlier. All those convicted have to serve the remaining part of the sentence.

The SC also restored the fine of Rs10 crore each on all three involved in the DA case.

The verdict was announced at 10:30 am. The bench comprising Justices Pinaki Chandra Ghose and Amitava Roy separately delivered the verdict.

Both judges upheld Karnataka High Court verdict on Jayalalithaa, saying since Jayalalithaa died the case has abated. Both sent it back to the HC without suspending the latter's verdict;

Elation followed by confusion among the supporters of both Sasikala and Panneerselvam at Poes Garden.

Police, meanwhile, are reportedly evacuating the camping MLAs from the luxury resort at East Coast Road.

Merely a week ago, the drama in Tamil Nadu unfolded without warning and there were two close confidantes of the late Jayalalithaa who were at each other for the chief minister's post. While Panneerselvam went to Jaya's memorial and claimed "Amma spoke" to him, Sasikala said she was the one who stood by Amma for 33 years when the former chief minister was ridiculed by everyone.

A little more than a week later, the Supreme Court's verdict convicting Sasikala and Jayalalithaa comes as a shock and a huge setback for the Sasikala camp that had hoped to make the numbers to prove their majority on the floor of the state assembly.

However, Sasikala can take the case further and refer it to a larger bench, even though her political career has effectively ended.

"AIADMK still has the majority. They should immediately nominate another person to lead the government in the state, and governor should swear this person in immediately. Any further delay in swearing-in could lead to another case," BJP leader Subramanian Swamy told News18.

A pamphlet, which lists out 10 points explaining why Panneerselvam was always former chief minister Jayalalithaa's first choice was circulated among party supporters. Among other things the pamphlet mentioned that Panneerselvam was trustworthy and loyal.

Panneerselvam 's biggest weakness, since his break with Sasikala, has been the lack of police support and his inability to reach the MLAs to seek their endorsement. There had been reports that the police had provided tacit support to the Sasikala camp in guarding the resort and in ensuring that nobody from outside gained access. Reportedly there was a security ring provided by private security.

Panneerselvam had that alleged there were four "goondas" per MLA -  and the police also seemed to have supported them by preventing the media or others from entering the resort.

In his counter-move, Panneerselvam changed the state police intelligence chief on Monday evening and appointed S Davidson Devasirvatham, who had been shunted out in 2015 to ensure a cvhange in the police strategy so that Sasikala would lose their alleged patronage.

Elaborate security arrangements have been made outside Sasikala's residence in Poes Garden as precaution ahead of Supreme Court's verdict in the corruption case against VK Sasikala.

It costs Rs3,50,000 for 119 members of the Tamil Nadu legislative assembly "living like a large, happy family" in 56 rooms at Golden Bay Resorts in Koovathur, Tamil Nadu. That's the room rent for a single day minus all the frills, service tax, Swachh Bharat cess and that sort of petty cash detailing.

News18 reports that Sasikala is mulling picking a new successor as the Supreme Court pronounced its verdict. According to the report, Sasikala might pick Jayalalithaa's nephew for the post.

Now, it is up to governor Vidyasagar Rao to implement the judgment. Panneerselvam may have to prove majority in the house.