After confining him under house arrest, Pakistan's interior ministry has included the names of Jamaat-ud-Dawa chief and 26/11 Mumbai terror attack mastermind Hafiz Saeed, and 37 others who are affiliated with JuD or Lashkar-e-Taiba, on the Exit Control List. 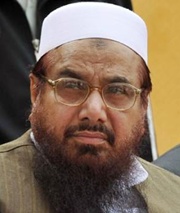 The ministry has sent letters to all the provincial governments and the Federal Investigation Agency (FIA) in this regard.

While the obvious inference was that Pakistan was acting under pressure from the new US administration, some reports said it was pressure from China rather than the US that prompted the move.

"Placed Falah-e-Insaniat Foundation (FIF) and Jamaat-Ud-Dawa (JUD) on the Watch List as per UNSC 1267 Sanctions and have listed these organisations in the Second Schedule of the ATA 1997 (as amended)," Geo TV quoted a notification issued by the ministry.

"Hafiz Muhammad Saeed, Abdullah Ubaid, Zafar Iqbal, Abdur Rehman Abid and Qazi Kashif Niaz are reportedly active members of the aforementioned organisations within the meaning of Section 11EEE(1) of the ATA 1997 (as amended). As such, they must be placed under preventive detention," said the ministry.

The detention order surfaced hours after Interior Minister Chaudhry Nisar hinted that a crackdown was imminent.

He told reporters in Islamabad on Monday that given that the group had been under observation for years and was blacklisted internationally, Pakistan was "under obligation to take some action".

Saeed told reporters that he would challenge his detention in court.

"My detention orders are unlawful and we will challenge them in the court," Saeed told reporters before he was led away by the police.

India reacted cautiously, stating that only a ''credible crackdown'' on the 26/11 Mumbai terror attack mastermind and other terrorist organisations will prove the 'sincerity' of its Asian neighbour.

External affairs ministry official spokesperson Vikas Swarup said that the government has seen the reports on the Pakistan interior ministry order placing the JuD and the Falah-e-Insaniyet Foundation on the watch-list and also the notification under which the foundation has been included in the second schedule of their anti-terror legislation under UN Security Council Resolution number 1267.