Nikki Haley confirmed as US envoy to UN; gets cross-party backing 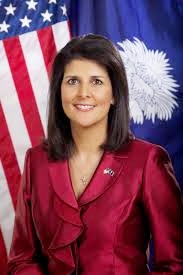 South Carolina Governor Nikki Haley was confirmed on Tuesday to become the next US ambassador to the United Nations, placing a rising Republican political star in charge of advancing President Donald Trump's agenda in an institution whose effectiveness he has questioned.

She will step down from her post in South Carolina to take one of the country's highest profile diplomatic jobs and one that would burnish her resume for higher office later.

Haley, who has no formal diplomatic experience, won significant Democratic support. The vote of 96-4 reflected some Democrats' view that Haley would be a sensible diplomat and speak her mind in the new administration.

She won praise from Democrats during her confirmation hearing last week, where she freely aired disagreements with Trump on some policy matters and said that the new president would welcome a range of views.

Haley, who had been critical of Trump as a candidate, voiced heavy scepticism about Russia and optimism about NATO, both deviations from some of Trump's statements. She unequivocally rejected the idea of a Muslim registry or ban, which Trump has never fully disavowed.

She said she is comfortable with Trump's "America first" approach and would reassert the traditional role of the United States in recent decades of protecting Israel from United Nations action it considers biased.

She also declared her support for moving the US Embassy in Israel from Tel Aviv to Jerusalem, a shift that Arab leaders have previously said could ignite violence in the Middle East.

At her 18 January hearing, Haley questioned the priorities and effectiveness of the world body, which Trump has called a toothless debating society, but said she intends to "fix" what doesn't work.

"I have no problem calling people out," Haley said.

The United Nations is "often at odds with American national interests and American taxpayers", Haley said, adding that she would use the "leverage" of potential cuts in US funding to demand reform.

"We contribute 22 per cent of the UN's budget, far more than any other country. We are a generous nation," Haley said. "But we must ask ourselves what good is being accomplished by this disproportionate contribution. Are we getting what we pay for?"

Haley is best known nationally for her handling of the 2015 racially motivated killings of black worshipers at a historic Charleston church, for which she got generally high marks. She spoke at memorials and encouraged the removal of the Confederate flag from the state Capitol grounds.