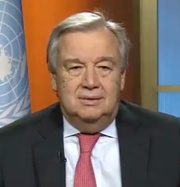 Will António Guterres, who took over as United Nations Secretary-General from Ban Ki-moon on Sunday, be one of the best heads the international body has had? Many observers seem to think so.

When Guterres resigned halfway through his second term as Portuguese prime minister in 2002 because his minority government was floundering, he did something unusual for a man who had seen the highest reaches of power. Several times a week, he went to slum neighbourhoods on the edge of Lisbon to give free maths tuition to children, points out The Guardian.

''He never allowed a journalist to go with him or let himself be filmed or photographed, and he never let journalists talk to any of his students,'' said Ricardo Costa, editor-in-chief of the Portuguese SIC News, who covered Guterres's political career. The former prime minister told his surprised students that what he was doing was personal and not for show.

The Portuguese socialist is an intellectual who grew up under Portugal's dictatorship and came of age with the 1974 revolution that ended 48 years of authoritarian rule.

Crucial to understanding Guterres, 67, is his Christian faith: his progressive Catholicism always informed his brand of social democratic politics.

In the heady days of Portugal's revolution, it was rare to be a practising Catholic in a new Socialist party where many members had Marxist backgrounds. But Guterres, a star engineering student who grew a moustache in honour of the Chilean left's Salvador Allende, would eventually become a modernising leader, arguing that his mission was social justice and equality.

Born in Lisbon, Guterres spent stretches of his childhood with relatives in the countryside, where he saw the poverty of rural life under the dictatorship, and later volunteered with Catholic student groups on social projects in the capital.

In 1976, the young engineering lecturer was elected a Socialist MP in Portugal's first democratic vote since the revolution. In parliament, he was a fearsome orator. Such was his talent for verbally destroying political opponents, he became known as ''the talking pickaxe''.

Guterres became prime minister in 1995. His campaign slogan was ''heart and reason'', a cry for more humanism and social politics. Three years earlier he had taken over the Socialist party and modernised it, although he remained to the left of contemporaries such as Tony Blair. For years he led the Socialist International grouping of leftwing parties.

With Portugal's rapid economic growth and nearly full employment, Guterres was able to set up a guaranteed minimum income and nursery schooling for all. But he had failed to win an absolute majority and was condemned to preside over a tricky minority government. He had to rely on his skill for consensus, always having to negotiate with the opposition parties if he wanted to get anything passed – something he later argued was perfect training for running the UN.

''He was a skilful person – very smart, very quick to understand the other point of view and very focused on having solutions – that's why it worked,'' António Vitorino, Guterres's deputy prime minister and defence minister, told The Guardian.

Family tragedy
Guterres was furiously hardworking. But behind this was a backdrop of family tragedy. His wife, Luísa Guimarăes e Melo, a psychiatrist with whom he had two children, had been critically ill for most of his time in government and was undergoing treatment at a London hospital.

''It was one of the hardest moments of his political life,'' Vitorino said. ''Every Friday morning, he took a plane to London, spent the weekend there in a very desperate situation and then on Monday morning he was back at work. I was his deputy prime minister, I was amazed. I could never have done what he was doing.''

In 1998, Guterres's wife died. The following year, he threw himself into the general elections. He had hoped to win an outright majority but the Socialists ended up one MP short and began a second minority government. This time, a slowdown in the economy made things harder.

Guterres, privately growing disillusioned with internal party politics, turned increasingly to his interest in international diplomacy. He had already won praise for his role in resolving the crisis in Timor-Leste, a former Portuguese colony, which had erupted into violence in 1999 after a referendum vote in favour of independence from Indonesia. Guterres led diplomatic efforts to convince the UN to intervene to restore peace.

In 2000, when Portugal took the rotating presidency of the European Union, its success was attributed to Guterres's ability to get big leaders to agree and smaller leaders to be heard.

In 2002, halfway through his second term as prime minister, Guterres abruptly resigned after the Socialists suffered a drubbing in local elections. He famously said he wanted to avoid the country falling into a ''political swamp'' and that he had discovered ''politics has its limits''.

At the time he was unpopular, criticised for too much compromise and too much dialogue. But over the years since his departure, polls showed he was increasingly liked and seen as fair, serious and honest – a possible contender for Portuguese president, although he never wanted to return to national politics, preferring, he said, to make a difference on the world stage.

His decade serving as UN high commissioner for refugees (UNHCR) from 2005 to 2015 was seen in Portugal as an obvious fit for his personality: socially engaged but seeking common ground.

Multi-lingual
Guterres – who speaks Portuguese, English, French and Spanish and is now remarried to Catarina Vaz Pinto, who works at Lisbon city hall – was known in political circles for enthusiastic, cultured conversations on everything from ancient Greece to Middle Eastern culture, opera to geography.

Whenever he had free time during visits to Washington as UNHCR chief, he would get the organisation's regional representative, Michel Gabaudan, to take him to Politics & Prose or another of the city's bookshops.

Guterres also took a broad approach to the UNHCR's responsibilities. The organisation grew dramatically under his management, and not just because the number of the world's refugees soared in the 21st century. He broadened the categories of people the UNHCR would seek to protect, including internally displaced people and migrants forced from their homes by natural disasters and climate change. He preferred the all-encompassing phrase ''people on the move''.

He managed to persuade donors to fund the expansion by retaining their confidence that the money was well spent, and to do that he cut overheads.

When Justin Forsyth was chief executive of Save the Children UK, he travelled with Guterres to refugee camps in Lebanon, and recalled Guterres meeting a group of children. ''The thing that struck me was him cross-legged on the floor of a tent talking to children. He really listens and he asks questions and he's very moved by what he hears. He gets his hands dirty,'' said Forsyth, the new deputy executive director of Unicef, the UN children's charity.

Adaptable, consensual, affable, intellectual, Guterres is perhaps better qualified than any of his nine predecessors for the world's most demanding job. But one of his deftest skills he learned not from the hurly burly of Portuguese politics, nor from the harrowing years at the UNHCR, but from his first wife.

At a Guardian event last June in which he debated with rivals for the secretary general job, he said her psychoanalytical insights were highly valuable. ''She taught me something that was extremely useful for all my political activities. When two people are together, they are not two but six. What each one is, what each one thinks he or she is and what each one thinks the other is,'' he said.

''And what is true for people is also true for countries and organisations. One of the roles of the secretary-general when dealing with the different key actors in each scenario is to bring these six into two. That the misunderstandings disappear and the false perceptions disappear. Perceptions are essential in politics.''