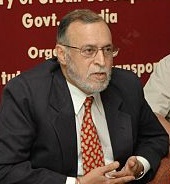 President Pranab Mukherjee gave his approval to Baijal's appointmet as the next Lt Governor of Delhi on a recommendation from PM Narendra Modi's Office.

Earlier in the day, the President also accepted the resignation of Najeeb Jung.

Baijal, a 1969 batch IAS official of the union territory cadre, was appointed home secretary in February 2004. He was the vice chairman of the Delhi Development Authority (DDA) before joining the union home ministry and is familiar with the Delhi administration.

Baijal's appointment follows the sudden exit of Najib Jung, whose nearly three-and-a-half-year tenure was marked by frequent run-ins with the AAP government in Delhi.

Jung, a 65-year-old former bureaucrat, quit abruptly a few days after he wrote to the centre stating that he was going on leave to Goa during Christmas.

Jung's office later issued a brief statement that he had submitted his resignation to the government and that he would be returning to academics, "his first love".

Jung, a 1973-batch IAS official, had assumed charge as the 19th Lt governor of Delhi on 9 July 2013, five months before the Delhi Assembly elections.