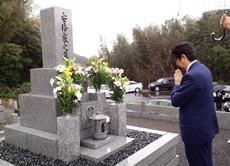 The USS Arizona Memorial was closed to the public for the day when Abe visited the historic site, joined by US President Barack Obama, who is on holiday in Hawaii with his family.

Abe laid wreaths at cemeteries and memorials on Monday ahead of the landmark visit to the site of the 1941 bombing by Japan that plunged the United States into the Second World War.

He landed at Joint Base Pearl Harbour-Hickam and then headed to the National Memorial Cemetery of the Pacific, where he laid a wreath. He stood for a moment of silence at the cemetery near central Honolulu, which is known as Punchbowl.

Abe later visited a nearby memorial for nine boys and men who died when a US Navy submarine collided with their Japanese fishing vessel in 2001. At the Ehime Maru Memorial, he again laid a wreath and bowed his head.

Japan's former leader Shigeru Yoshida went to Pearl Harbour in 1951, six years after Japan's surrender, but that was before the USS Arizona Memorial was built. He arrived at Pearl Harbour shortly after requesting a courtesy visit to the office of Admiral Arthur Radford, commander of the US Pacific fleet. The office overlooked Pearl Harbour, offering a direct view of the attack site.

The importance of Abe's visit may be mostly symbolic for two countries that, in a remarkable transformation, have grown into close allies in the decades since they faced off in brutal conflict. At the same time, it is significant that it took more than 70 years for US-Japanese relations to get to this point.

But the Japanese government had made it clear earlier this month that Abe would not apologise for Japan's attack.

Chief cabinet secretary Yoshihide Suga said ''the purpose of the upcoming visit is to pay respects for the war dead and not to offer an apology''.

The visit comes six months after Obama became the first sitting American president to visit Hiroshima for victims of the US atomic bombing of that city at the end of the same war.

Remembering the day of the attack in 1941, Rodrigues said he had just sat down to have breakfast when the alarm sounded and the word got out - 'man your battle stations, this is not a drill' - he recalled.

''We all ran out to the armoury to get rifles and ammunition and we could see the planes up above with the red circles on the bottom. We knew it was the Japanese planes,'' he said.

Rodrigues says he does not think Mr Abe should apologise.