Exxon chief Rex Tillerson to be Trump's secretary of state

US President-elect Donald Trump has selected Exxon Mobil chief executive Rex Tillerson as his nominee for secretary of state, people with knowledge of the decision told the Associated Press on Monday night. 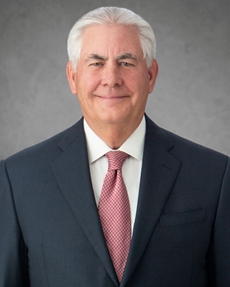 Trump said earlier that he would announce his pick Tuesday morning, though it has been known for some time now that Tillerson was the leading contender for the job.

Trump on Monday called former Massachusetts Governor Mitt Romney, who he interviewed earlier for the post, to tell him he wasn't getting the job, according to a person familiar with the matter, speaking on condition of anonymity because an announcement hasn't been made, reports Bloomberg.

Romney posted a brief message on Facebook Monday night saying he was honoured to be considered for the role and was optimistic about the future Trump administration.

Trump previewed his decision Monday night on Twitter but gave no hint of who he intended to choose. He lauded Tillerson in an interview broadcast Sunday, and a person close to the presidential transition said Trump was likely to offer him the job.

Tillerson, who hits Exxon's mandatory retirement age of 65 in March, would be the first oil executive and only the second Texan to lead the State Department. If Trump picks him, the move would hand the job of the nation's top diplomat to a man whose ties to Russian President Vladimir Putin go back almost two decades at a time when possible Russian interference in the US election is under scrutiny.

The prospect of a Tillerson nomination has already drawn some objections from lawmakers in both parties, who expressed concern about his extensive dealings with Putin. That suggests that choosing the Exxon executive could set up a messy Senate confirmation fight for Trump. Republican Senators John McCain of Arizona and Marco Rubio of Florida were among those who said they had questions about Tillerson's dealings with Putin.

Confirmation hearings also may become a proxy fight over Trump's position that Putin is an effective leader with whom he can reach agreements, a stance widely unpopular among lawmakers in both parties. Added to the mix is a looming congressional inquiry into Russian meddling in the election. The Washington Post reported on Friday that the CIA has told senators that Putin's government was actively seeking to help Trump win the election - a step beyond an earlier finding that the goal was to undermine the credibility of the US political process.

President Barack Obama has ordered a full review of the evidence of Russian hacking. Trump has rejected the idea that Russia has been pinpointed as the source of the hacks of Democratic Party servers.