Leaders converge in Chennai as Jayalalithaa's body laid to rest

The body of departed AIADMK supremo and Tamil Nadu chief minister Jayalalithaa Jayaram was laid to rest at the Marina Beach close to the memorial of his mentor and the founder of AIADMK M G Ramachandran. 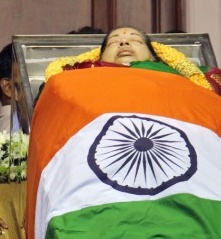 The last journey of Jayalalithaa, whose body was laid in state in Chennai's Rajaji Hall, began in the evening, even as the Prime Minister, state chief ministers and other political leaders cutting across party lines as also people from all walks of life gathered in Chennai to bid goodbye to the departed soul.

The funeral procession began at around 3:45 pm from Rajaji Hall to the MGR Memorial site off Marina beach where she was buried at around 5 pm.

Her long time friend and political aide Sasikala, who was seen standing next to her casket through the day, performed the last rites.

Television visuals showed the procession move through a sea of supporters who have descended upon the city to pay tribute to their leader who died on Monday night.

The body of Jayalalithaa, which was draped in her favourite green saree, was taken from her Poes Garden residence early this morning to Rajaji Hall where tens of thousands of people queued up to have a last glimpse of their 'Puratchi Thalaivi Amma' (Revolutionary Leader Amma).

Before the funeral procession began, leaders from across the country paid tribute to her at the Rajaji Hall.

Prime Minister Narendra Modi was among scores of political leaders who pad floral tributes to the 68-year-old AIADMK chief at the Rajaji Hall and at the Marina Beach where her body was finally laid to rest.

While President Pranab Mukherjee was supposed to attend her funeral, his flight had to return after a mid-air snag.

As the casket carrying the body of six-time chief minister was placed on the steps of Rajaji Hall, in the heart of the city off arterial Anna Salai, four Army men covered it with the national Tricolour.

Chief minister O Paneerselvam and his ministerial colleagues, MPs and MLAs and senior state government officials were among the first to pay homage to Jayalalithaa, who passed away at the Apollo Hospitals here at 11.30 last night after waging a grim battle for life since her hospitalisation on 22 September. The inconsolable Panneerselvam even broke down while PM Modi was paying tributes to her.

West Bengal chief minister Mamata Banerjee who paid rich tributes to Jayalalithaa in Tamil on Twitter could not attend the event because of flights not being available. She sent TMC MPs Derek O'Brien and Kalyan Banerjee instead.

Odisha chief minister Naveen Patnaik, who gave a moving speech about Jayalalithaa in the state assembly, said last night that he would be attending the AIADMK supremo's funeral. He said she was the leader of the masses and had made an immense contribution to the development and welfare of the people of Tamil Nadu.

'Amma' was a godmother for the women of Tamil Nadu, said Jammu and Kashmir chief minister Mehbooba Mufti.

Former Prime Minister HD Devegowda was among the dignitaries to pay tributes to Jayalalithaa. Karnataka chief minister Siddaramaiah also paid tributes to her in Rajaji Hall:

Another former prime minister who paid tributes to her was Manmohan Singh. "I join millions of admirers of Jayalalithaji in mourning her sad and untimely demise. She was a charismatic leader who will be remembered forever as the beloved Amma by the people of Tamil Nadu. She was an outstanding leader who was passionately devoted to the welfare of the people of Tamil Nadu," he said.

Putting to rest the rivalry with AIADMK, leader of the DMK MK Stalin paid floral tributes to her. Stalin had also tweeted expressing grief over Amma's death.

Congress vice-president Rahul Gandhi landed in Chennai late in the afternoon to pay respects to Jayalalithaa.

Cries of "Amma" rent the air as the public filed past taking a last glimpse of their beloved leader from a distance away from the stairs, where the Tamil Nadu ministers were seen seated.

Jayalalithaa's body was first taken to her Poes Garden residence in the early hours and then brought to the Rajaji Hall.

Police had since tightened security all around for her last journey to Marina Beach. Emotional scenes were witnessed as several women were seen wailing and thumping their chests.

Public transport services, including autorickshaws, were off the roads while some private vehicles were seen plying in various parts of the city where police personnel kept a tight vigil at vantage points.

A near total shutdown like situation prevailed in the city and several several other parts of the state since last evening.