The centre today announced a state mourning throughout the country as a sign of respect to the departed leader Jayalalithaa Jayaram, one of the most powerful and resonating woman voice in Indian politics. 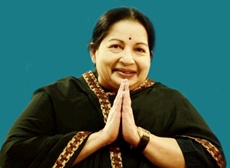 ''The Government of India today announced with profound sorrow the death of Selvi J Jayalalithaa, chief minister of Tamil Nadu, yesterday at Chennai. Today, the Government is observing one-day State mourning throughout the country and there will be no official entertainment,'' an official release stated.

The National Flag will fly half-mast in the capitals of all states and union territories, including Delhi and throughout the state of Tamil Nadu, as a mark of respect to the departed dignitary.

A state funeral will be accorded to the departed leader at 4.30 PM today in Chennai.

In a condolence message to Vidyasagar Rao, the governor of Tamil Nadu, the President has said, ''I am extremely sad to learn about the sad demise of Ms Jayaram Jayalalithaa, chief minister of Tamil Nadu.

Popularly known as 'Amma' and 'Puratchi Thalaivi', Jayalalithaa was a talented film star as well as a leader and administrator who distinguished herself through her political acumen and people friendly programmes. She was regarded one of India's most charismatic and popular leaders.

A prolific and versatile film actress, she appeared in films of different genres and performed a wide variety of roles. She served the country with distinction in different capacities, including as member of Parliament (Rajya Sabha), member of the Tamil Nadu legislative assembly, first woman leader of opposition in the legislative assembly and as five times chief minister of Tamil Nadu. She was the youngest ever and the second woman to be elected chief minister of Tamil Nadu.

In a condolence message President Pranab Mukherjee said, ''I had opportunity to interact closely with her both when we were together in the Rajya Sabha and during her different tenures as chief minister. She was progressive in her thought and pro-active in pursuing the issues that were close to her heart, such as the empowerment of women and welfare of children.

''As chief minister of Tamil Nadu, Jayalalithaa introduced a number of pro-poor schemes in various fields, including education, food security, provision of safe drinking water, the girl child etc. Her life was dedicated to the socio-economic transformation of Tamil Nadu and its people.

''In her passing away, the nation has lost an icon who was loved and admired by millions. Her contribution to the progress and development of Tamil Nadu will be long remembered.''

''Jayalalithaa ji connect with citizens, concern for welfare of the poor, the women and marginalised will always be a source of inspiration.

''My thoughts and prayers are with the people of Tamil Nadu in this hour of grief.

''May the Almighty grant them the strength to bear this irreparable loss with courage and fortitude.

''I will always cherish the innumerable occasions when I had the opportunity to interact with Jayalalithaa ji. May her soul rest in peace,'' the prime minister said.