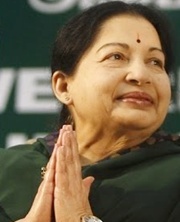 Tamil Nadu chief minister Jayalalithaa Jayaraman passed away on Monday, bringing the curtain down on an entire political era in Tamil Nadu, the state she ruled firmly for 15 years over three decades

Jayalalithaa, 68, was declared dead at 11:30 pm on Monday by Chennai's Apollo Hospital where she was under intensive care for the past 75 days.

She was declared dead close to midnight of Monday by Apollo Hospitals, after a tense final 24 hours and amidst rumours that she had died hours earlier.

Thousands of mourners started filing past the flower-bedecked body of the former Tamil Nadu chief minister early on Tuesday as Tamil Nadu mourned the death of one of its most popular and charismatic leaders.

Draped in the Tricolour, the body of the AIADMK leader was kept at the Rajaji Hall in Chennai for people to pay homage to the six-time chief minister.

The government said the cremation of Jayalalithaa will take place at 4.30 pm near the iconic Marina beach, at the memorial site of her mentor and former chief minister MG Ramachandran.

`Amma' to millions of Tamils and godmother to legions of AIADMK cadres, Jayalalithaa will be accorded a state funeral. Flags will be flown at half mast. The centre has declared a one-day mourning on the chief minister's demise.

The state government declared a seven-day mourning beginning Tuesday. Schools, colleges, offices and businesses will remain closed for the next three days, which have been designated a public holiday in the state.

Draped in her favourite green colour saree, Jayalalithaa's body was taken from her Poes Garden residence to Rajaji Hall where hundreds and thousands of supporters queued up to have a last glimpse of the powerful leader, nicknamed 'Puratchi Thalaivi' (revolutionary leader).

As the casket carrying the body was placed on the steps of Rajaji Hall, in the heart of the city off arterial Anna Salai, four armymen covered it with the Tricolour.

The new chief minister O Panneerselvam and his ministerial colleagues, MPs and MLAs and senior state government officials were among those who paid homage to Jayalalithaa.

Jayalalitha, who was admitted to the Apollo Hospitals on 22 September for treatment of fever and chest infection, died after waging a grim battle for life ever since.

J Jayalalithaa was an extraordinary Indian politician – a single woman who survived social stigma attached to the tinsel world and fought her way up in the treacherous world of politics to establish herself firmly in the minds of not only Tamil people but others elsewhere as well who saw her as an exemplary leader.