Israel president Reuven Rivlin flew into Mumbai today on his six-day visit to this country, during which he will visit sites of several joint project besides discuss areas of cooperation between the two countries. 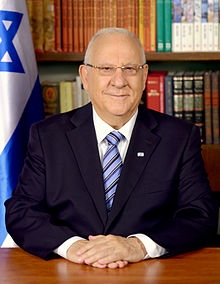 Rivlin, who is accompanied by his wife and a large delegation of businessmen and academicians, will leave for New Delhi later in the day. Rivlin will join President Pranab Mukherjee in opening an agrotech conference in Chandigarh.

Rivlin will pay his respects at the sites of the 2008 Mumbai terror attacks in Mumbai and lay wreaths at memorials for Mahatma Gandhi in Delhi and for Indian soldiers, who fell in the World War I in Israel and the Middle East.

Six Jews were killed at the Mumbai Chabad house during the Mumbai terror attacks on 26 November 2008.

He will also hold meetings with senior Indian officials and with leaders of the Jewish community.

Indian and Israeli universities are also expected to sign around 15 MoUs in the field of research besides promoting exchange of faculty between the two countries during Rivlin's visit.

Promoting education ties between the two countries will be one of the top agendas of discussion and the MoUs to be signed between educational institutions will include both general and specific.

''The focus of general MoUs will be more towards faculty exchange. There are 15 MoUs in the pipeline between Israeli education institutions and some of the top Indian universities like Delhi University, Jawaharlal Nehru University, Mumbai University and OP Jindal University among others,'' said minister counsellor, head of public diplomacy, Embassy of Israel, Ditza Froim.

''By unique MoUs, we mean the ones that are related to promoting joint research between the two countries. In 2013, a joint research programme was started between the two countries under which researchers from both nations joined hands to work in areas of life sciences and chemistry. The idea now is to further strengthen the research programme in areas like agriculture, food security and entrepreneurship and give more grants to students,'' she added.

Addressing Israeli media before his departure, Rivlin termed India as a ''close friend'', and described the two countries as places of ''innovation and inspiration''.

''I am departing now on an important visit to India, an important ally and close friend of Israel, a state with whom we have much in common,'' Rivlin said late yesterday, just before leaving for New Delhi.

''Israel and India are both countries of innovation and of inspiration. Countries that have ancient traditions, but have built strong and thriving hi-tech economies, and now celebrate 25 years of diplomatic relations. This visit is a sign of the strong relations and friendship between our peoples, and I hope will plant the seeds for that friendship to grow closer and closer,'' he said.

''The issue of international cooperation in higher education and the expansion of academic ties between Israel and the world – in particular with India – is one of the central aims of the multi-year plan for higher education in Israel,'' said Yaffa Zilbershats, head the Council for Higher Education's budget committee.

The expansion of academic ties would include student exchanges, joint research projects and the founding of inter-institutional fora to promote academic cooperation between Israeli and India universities and colleges, he noted.

Rivlin, in the past, has complimented the Indian students in Israel, saying ''they are among the best'' of the lot.

''India represents a great challenge for Israeli to strengthen cooperation and partnership with their Indian counterparts,'' said Shraga Brosh, President of Manufacturers Association of Israel, who is heading the business delegation.

''I have no doubt that this will be a fruitful visit and forge long-lasting economic partnerships which will strengthen and help grow the bilateral trade between the countries'', Brosh said.

Israel has been the second largest supplier of defence equipment to India for many years and its ''timely'' supply of Indian requirements during the Kargil War has earned it the tag of a 'reliable' partner.