Federal Bureau of Investigation director James Comey said on Sunday that after reviewing newly discovered Hillary Clinton emails, his agency had again determined that the Democratic presidential candidate should face no criminal charges for her email practices, clearing an issue that had dogged the final days of Clinton's campaign and providing perhaps the last twist of the eventful 2016 election year. 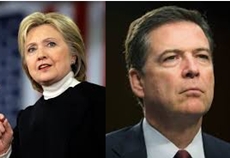 Comey notified key members of Congress of the finding in a letter sent on Sunday afternoon, writing that that investigators had worked "around the clock" to review all the emails found on a device used by former congressman Anthony Weiner that had been sent to or from Clinton and determined that the emails did not change "our conclusions expressed in July".

With the letter, Comey removed the pending FBI investigation from the last 48 hours of the campaign. But the central role the FBI has played in the political process for months could cause lingering trouble for the nation's top law enforcement agency, including personally for Comey, who must work with whoever is elected president on Tuesday.

Investigators reviewing the material found that the emails were either duplicates of correspondence they had reviewed earlier or personal emails that did not pertain to State Department business, a government official said. The official said Comey's letter was not an "interim report" but rather represented a conclusion of the investigation.

Comey had upended the campaign just nine days ago, when he alerted Congress that new emails had been located that were related to Clinton's use of a private server as secretary of state.

The announcement effectively revived a controversy that had dogged Clinton since before she launched her presidential campaign and resumed an FBI investigation that had concluded in July. At the time, Comey had criticized Clinton as "extremely careless" with classified information but said "no reasonable prosecutor" would recommend criminal charges.

Prior to his 28 October announcement, Clinton had opened a significant lead over Republican Donald Trump in most public polling following a string of strong debate performances. But the polls tightened considerably as Clinton's email practices once again took centre stage.

The newly discovered emails came from a laptop owned by Weiner, the estranged husband of top Clinton aide Huma Abedin. The computer had been seized by the FBI on 3 October as part of an investigation into lewd text messages Weiner is alleged to have sent to a 15-year-old girl. Abedin has told people close to her that she does not know how her emails ended up on her husband's laptop.

Comey had come under fire for inserting the FBI into the campaign's final days with the announcement. Department of Justice policy discourages the agency from taking steps in days before an election, to avoid the perception that the FBI is trying to the influence the outcome of the vote.

A spokesman for the FBI declined to comment beyond Comey's letter. A Department of Justice spokesman said only that the department and FBI had "dedicated all necessary resources to conduct this review expeditiously".

Clinton campaign spokesman Brian Fallon tweeted in response, "We were always confident nothing would cause the July decision to be revisited. Now Director Comey has confirmed it."

The news hit as Clinton and her team flew from Philadelphia to Cleveland for a campaign event. Some aides read the news on a phone passed around the staff cabin before the plane lost satellite WiFi ahead of landing.

The three-paragraph letter was sent to the chairman of Homeland Security, Judiciary, Appropriations and Oversight and Government Reform and was copied to the ranking members of those committees. Comey said the FBI had performed an "extraordinary amount of high-quality work in a short period of time".

The latest letter comes on the heels of a brutal week for the FBI and its leader, Comey, who just nine days ago told legislators the email investigation had resumed, doing so against the advice of higher-ups at the Department of Justice.

The FBI Director soon faced a torrent of criticism for taking a step that might affect the outcome of the election. People familiar with the situation said he did so over objections from the Department of Justice.

Then, news leaked that agents in the New York Field office had been advocating a separate investigation of the Clinton Foundation, even though career public integrity prosecutors had told them they had no case.

That fuelled the perception that at least some in the bureau, a predominantly white male organization, might have partisan motivations, and Democrats called for the Justice Department inspector general to look into the matter.

Trump, who had charged for weeks that the FBI investigation had been rigged because it did not result in criminal charges for Clinton, instead announced that he had "great respect" for the FBI. At a rally in Minneapolis Sunday afternoon Trump did not address Comey's announcement directly but instead claimed, without evidence, that Clinton "will be under investigation for a long, long time ... likely concluding in a criminal trial".

"You have to understand, it's a rigged system, and she's protected," he said, as supporters chanted "Lock her up!"

House Speaker Paul Ryan, R-Wisc, said that regardless of Comey's announcement, "the undisputed finding of the FBI's investigation is that Secretary Clinton put our nation's secrets at risk and in doing so compromised our national security.

"Fortunately, the American people have the opportunity to ensure Secretary Clinton never gets her hands on classified information again. Let's bring the Clinton era to an end by voting for Donald Trump on Tuesday," Ryan said in a statement.