Thailand's much-adorned King Bhumibol Adulyadej, who ruled the country for 70 years, passed away in the afternoon today at the age of 88, leaving his country in a political flux. 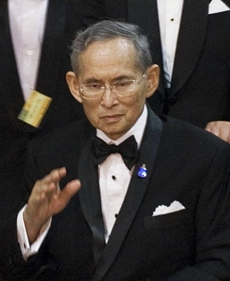 The king has been ailing for the past few years and the palace announced that the king died ''peacefully'' at 3:53 pm local time. ''Even though the board of doctors has closely monitored and treated him to the best of its abilities, the king's condition never improved but deteriorated until Thursday,'' the palace said.

Bhumibol's body will rest in Bangkok's spired Grand Palace in a golden urn, draped in silk, gold and diamonds, for an official grieving period of one year, as Brahmin priests and Buddhist monks chant incantations.

The world's longest-reigning, the world's richest and the most-adorned, at least among his own subjects, Bhumibol has been credited with staving off numerous catastrophes through intelligence, fortitude and his love for the country. Yet, in the last decade of life, his kingdom, Thailand, has been increasingly wracked by bitter political schisms.

Reports quoting Prayuth Chan-ocha, leader of the ruling junta, said Crown Prince Maha Vajiralongkorn will be the new monarch in accordance with the constitution. ''He was a king that was loved and adored by all. The reign of the king has ended and his kindness cannot be found anywhere else,'' Prayuth was quoted as saying.

However, many in Ythailand still doubt the 63-year-old Maha Vajiralongkorn, a former military air force pilot trained in the US, UK and Australia, to win the same respect as his father. Many also wondered whether one of the three princesses would ascend the throne instead.

Thailand is mired in wrangling over the sensitive subject of succession, and control of the royal fortune and the instability brought about by the latest military coup d'etat of 22 May 2014. The economy is flat and Bangkok has been shaken by terrorist attacks and elections have been repeatedly pushed back by the ruling junta.