Portugal's Antonio Guterres to be next UN Secretary-General

Antonio Guterres, former UN High Commissioner for Refugees and a former prime minister of Portugal, has emerged as the clear favourite to become the next United Nations Secretary-General following the sixth secret ballot held on Wednesday by the UN Security Council. 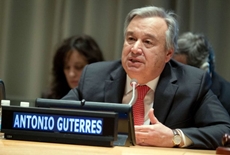 Ambassador Vitaly Churkin of Russia, which holds the Security Council presidency for the month, announced the decision at a press conference in New York attended by all 15 diplomats on the Security Council, including his American counterpart, Samantha Power.

The decision was taken at the sixth informal ''straw poll'' for the position of Secretary-General held earlier in the day.

The council will announce its formal decision Thursday (6 October) at 10:00 am and forward Guterres' name to the 193-member General Assembly for final confirmation, Mogens Lykketoft President of the UN General Assembly said.

In addition to Guterres, who served as the UN High Commissioner for Refugees from 2005 to 2015, there were 12 other candidates in the running to succeed the current UN Secretary General, Ban Ki-moon, who leaves office at the end of the year.

The selection of a new United Nations Secretary-General, traditionally decided behind closed-doors by a few powerful countries, has for the first time in history, involved public discussions with each candidate campaigning for the world's top diplomatic post.

These so-called 'informal briefings' between the candidates, UN member states and civil society representatives kicked off on 12 April, when the first three candidates presented their 'vision statements' and answered questions on how they would promote sustainable development, improve efforts to create peace, protect human rights, and deal with huge humanitarian catastrophes should they be selected to lead the organization.

In addition, this past July, the UN held its first-ever globally televised and webcast townhall-style debate in the General Assembly Hall, where the confirmed candidates at the time took questions from diplomats and the public at large.

Referring to the process as ''a game changer'' for the United Nations Organization, the President of the 70th General Assembly, Mogens Lykketoft said: ''I am very proud that we broke new ground with unique transparency in the selection process. The two-hour presentation of each of the candidates in the General Assembly dialogues, and their collective Global Townhall debate, were important highlights and helped to include the global public in the debate about the future of the UN.''

Guterres was one of the founding members of Portugal's Socialist Party, following the country's Salazar-Caetano dictatorship. After leaving the premiership in 2005, Guterres assumed the presidency of the Socialist International.

Guterres spent the bulk of his decade at UNHCR tightening bureaucracy and warning of the impending migrant crisis now gripping Europe. His three-year post was extended multiple times, and Ban, who is in Rome to celebrate the inauguration of the first annual Conference on Sport and Faith with the Vatican, resisted pressure to keep him on another year. Guterres was often a voice of support for efforts made by front line nations Greece and Italy, often scolding the larger European Union for turning a blind eye to the worsening problem.

''The selfless generosity of private citizens and civil society organizations reaching out to welcome and help the new arrivals is truly inspiring. And there has been exemplary political and moral leadership from a number of countries. But overall, Europe has failed to find an effective common response, and people have suffered as a result,'' Guterres had said months before he retired.

Portugal, an EU member-state as well as one of the charter members of NATO, an unlikely winner considering that most of this year's contenders hailed from the Balkans or former Soviet satellite countries.

Also, the US and the United Kingdom were pushing for a woman, the first in history, to take over from Ban. In recent days, Guterres's closest opponent was latecomer Kristalina Georgieva, the European commission's vice president, who only joined the race last week.