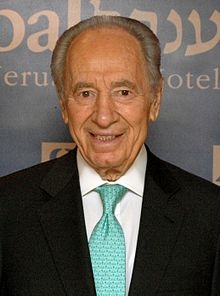 Peres suffered a massive stroke two weeks ago. He was reported to be making progress, but doctors said he took a turn for the worse on Tuesday. Peres' family was believed to be at his bedside when he died at Sheba Medical Center outside Tel Aviv.

The statesman's son, Chemi Peres, addressed the media from the Sheba Medical Center, saying that his father "did not have any other purpose in life other than serving those he loved", referencing the people of Israel.

He recalled that his father had told him: "You are only as a great as the cause you serve."

He said that his father had "bequeathed a future to us. We will continue building the state of Israel and will also seek peace.

"The loss we feel today belongs to all of Israel, we all share this pain."

His son-in-law and physician, Rafi Walden, said that his final contribution was to donate his corneas for transplant.

He added that Peres had remained healthy and vibrant up until the stroke, recalling a recent conference in Italy where Peres had delivered a lengthy speech, "as usual, without notes".

Walden said that the family was always in awe of his lasting influence, recalling how world leaders would stand before him "like students standing before the rabbi".

He said that the former prime minister had died free of pain, and praised the Sheba medical team who had worked tirelessly during the final two weeks of Peres' life.

Tributes flow in
"There are few people who we share this world with who change the course of human history, not just through their role in human events, but because they expand our moral imagination and force us to expect more of ourselves," US President Barack Obama said in a statement from the White House. "My friend Shimon was one of those people."

Peres' contemporary, former US President Bill Clinton, said that "Israel has lost a leader who championed its security, prosperity, and limitless possibilities from its birth to his last day on earth."

The pair had worked together, along with Palestinian leader Yasser Arafat, to bring about the 1993 Israeli-Palestinian Oslo Peace Accords, for which Peres won the 1994 Nobel Peace Prize, along with Arafat and Yitzak Rabin, the then-Prime Minister.

"He was a genius with a big heart who used his gifts to imagine a future of reconciliation not conflict, economic and social empowerment not anger and frustration," Clinton added.

"(Prime Minister) Benjamin Netanyahu and his wife Sara express deep personal sorrow for the passing of a man cherished by the nation, the (Former) President of Israel Shimon Peres," the statement read.

Former British Prime Minister Tony Blair tweeted that Peres was "a political giant, a statesman who will rank as one of the foremost of this era or any era".

UN Secretary General Ban Ki-moon said in a statement, "I met Mr. Peres on many occasions, and always benefited from his views. Even in the most difficult hours, he remained an optimist about the prospects for reconciliation and peace.

"As he once said at the United Nations: 'The time has come to comprehend that the real triumph is in the harvest of peace, not in the seeds of another war.'"

Political force
Peres was a political force for much of the modern Jewish state's existence. By the time the Labor Party veteran retired from public office in 2014 at the end of a seven-year term as President, he had been in Israeli politics for more than half a century.

He held virtually every position in Israel's Cabinet, including minister of defence and Prime Minister, a position he held three times, including once in an interim role.

As foreign minister under Prime Minister Yitzhak Rabin, he concluded the Oslo Accords.

After Rabin's assassination in 1995, Peres became prime minister, calling early elections so the government would have a mandate to pursue a two-state solution.

Peres addressed the Turkish Parliament in 2007, becoming the first Israeli President to speak to a Muslim country's legislature. He called for peace talks in 2011 with the Palestinians and warned the United Nations against recognizing the Palestinian territories as an independent state outside a peace plan.

He remained in the public eye, continuing his work for peace in the Middle East.

In a 2015 interview with CNN, Peres expressed support for a nuclear deal with Iran and said it would be feasible for inspectors to enforce the terms of the agreement.

The Israeli government convened  a special session on Wednesday morning to mourn the former leader. Arrangements for the funeral will be discussed by a special committee after the session.

Speaker Yuli Edelstein told CNN that staff at the Knesset - the Israeli parliament - have been instructed to prepare for a lying in state of Peres' coffin Thursday.