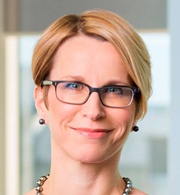 Walmsley, currently boss of GSK's consumer healthcare division, will take the reins from Sir Andrew when he retires on 31 March 2017. She will join the GSK board on 1 January, the company said in a statement this morning.

The new boss will become the seventh female chief executive in an FTSE 100, after Moya Greene at Royal Mail, Alison Cooper at Imperial Brands, Alison Brittain at Whitbread, Liv Garfield at Severn Trent, Veronique Laury at Kingfisher and Carolyn McCall at EasyJet. However GSK's market cap is larger than any of these companies, making Walmsley arguably the most powerful female boss in the index.

Walmsley, who is 47 and has four children, has held her current role since 2015, when the consumer healthcare division was reshaped following a three-part transaction with rival firm Novartis.

She joined GSK in 2010 from L'Oreal where, over the course of her 17-year career, she held a variety of marketing and general management roles in the UK, Europe, the US and China.

''Under Andrew's leadership, GSK has successfully developed into a company with market-leading positions in pharmaceuticals, vaccines and consumer healthcare. These provide excellent platforms for sustainable, long-term growth, and we are confident Emma will successfully build on these strengths."

Walmsley said, "I am delighted and honoured to be appointed GSK's next CEO. GSK is a company that leads both in science and in the way it does business. We have momentum in the group and as the demand for medical innovation and trusted healthcare products continues to rise, we have the opportunity and the potential to create meaningful benefits for patients, consumers and our shareholders.

''I'm looking forward to working with Andrew and other leaders over the next few months to ensure a smooth handover and to develop plans for 2017 and beyond."

Sir Andrew announced in March that he would step down from his role after nearly a decade in charge at the British company.

Glaxo has come under mounting pressure from some shareholders over its strategy and commitment to a diversified portfolio of businesses, with some investors lobbying for a break-up.

Glaxo has argued that its exposure to multiple markets is a strength, and Sir Andrew has long been an advocate of a diversified business structure.