US astronaut Jeff Williams landed back on earth safely on Tuesday night after creating a new record for the most time spent in space by an American. 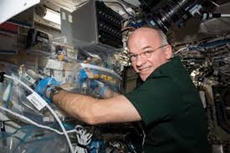 The NASA astronaut, along with Oleg Skripochka and Alexey Ovchinin of Russia's space agency Roscosmos, left the International Space Station at 5:51 pm Eastern Time and touched down three hours later on the steppes of Kazakhstan aboard Russia's Soyuz TMA-20M spacecraft.

Williams set the new record at 534 days, 2 hours and 48 minutes adding 172 days to his four-spaceflight career, when he returned to earth at 9:13 pm on Tuesday. He surpassed, astronaut Scott Kelly, who logged a three-flight total of 520 days, 10 hours and 30 minutes in March.

The trio who landed 90 miles southeast of the Kazakh town of Dzhezkazgan, were met by Russian recovery team members, who helped the astronauts with their readjustment to gravity.

With the crew's trip back to earth, the space station's Expedition 48 had come to an end as Expedition 49 began.

"We've enjoyed a great stay up here over the last almost six months," Williams said during a change of command ceremony Monday. "We especially enjoyed our stay with the entire crew of Expedition 48."

"I will certainly miss this view!" Williams tweeted earlier on Tuesday, posting a picture of sunlight glinting off the planet. "Vast gratitude toward my crew mates, ground teams, supporting friends, and family."

Meanwhile, a US space probe was cleared for launch on Thursday to collect and return samples from an asteroid in the hope of learning more about the origins of life on Earth and perhaps elsewhere in the solar system, NASA said.