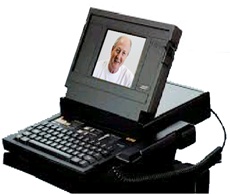 The British engineer's son Thomas Ellenby confirmed the news of his death to CNN Money. Ellenby's passing was first reported by The New York Times.

The Compass, which was the forerunner of the laptop of today was heavy enough to be curled like a dumbbell and had a foldout leg that propped up the back of the machine and helped prevent it from overheating.

Though the Compass was much too expensive for the  average person, it was popular with government agencies such as NASA.

Ellenby who was ahead of his times unveiled the next development in computing in the early '80s at a time when desktop computers were only just starting to appear. Steve Jobs unveiled Apple's Macintosh, two years after the Compass first arrived.

In 1990 Ellenby cofounded GeoVector which researched augmented reality, where computers overlaid information on top of what our eyes saw naturally.

In the 1990s Ellenby founded Agilis, which could be said to have made the first handheld mobile phone that was not the size of a brick. He later set up a company in both New Zealand and San Francisco for geographical mapping data before most people were even aware it was needed. According to some commentators, Ellenby pioneered four technology industry segments, which placed him on the same level as Steve Jobs.