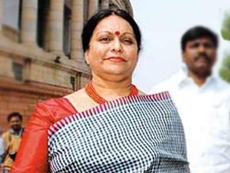 Reports quoting ED officials said the agency has ''certain evidence'' against her in the case for which she has been asked to appear before the investigators. The official did not say when she will be questioned.

Nalini Chidambaram, a Chennai-based senior lawyer, was named in the sixth supplementary chargesheet filed in the Saradha scam by the Central Bureau of Investigation.

She came under the ED's scanner after Saradha chairman Sudipta Sen alleged he had paid her over Rs1 crore at the instance of Manoranjana Singh, the estranged wife of Congress leader Matang Singh, both in jail for their alleged involvement in the Saradha scam.

The CBI, which is probing the multi-crore Saradha chit fund scam, had summoned Nalini Chidambaram in March this year.

Her role in Saradha chit fund scam came under scanner as she was the legal advisor of Manoranjana Sinh, ex-wife of former union minister Matan Sinh

Sen made the allegation against Nalini through his letter sent to the Central Bureau of Investigation (CBI) in April 2013.

Sen informed the CBI that he had paid for Nalini's visits to Kolkata and for her stays at a five-star hotel.

''Manoranjana Sinh took me to Chennai to the chamber of Nalini Chidambaram, who was her advocate. Madam Chidambaram asked me to help her (Manoranjana) by giving Rs42 crores to set up a television channel in the Northeast.

''She drafted the agreement and became the arbitrator for any future dispute. She fixed her fees at Rs1 crore and whenever she visited Kolkata along with Manoranjana her travel and stay in Taj group of hotels was borne by me.

''During our meetings Manoranjana also said that madam Chidambaram was the wife of then union home minister and that if the Chidambaram family stood by me I will enjoy great clout in India. Though Madam Chidambaram never assured it, she pressured me to pay Rs42 crore, but I paid Rs25 crore,'' Sen wrote.

The CBI suspects that Nalini received the money which was collected by Sen illegally.

West Bengal was rocked by the chit fund scam in 2013 when the Saradha Group and several other deposit-seeking firms went bust. Chit fund scam has since then been a major political issue in the state.

The group collected around Rs20,000 to 30,000 crore ($4 - 6 billion) from over 1.7 million depositors before it collapsed in April 2013. In the aftermath of the scandal the state government also set up a fund of Rs500 crore fund to ensure that low-income investors get back their deposits.