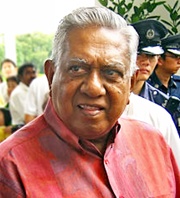 Nathan was admitted to hospital in critical condition after suffering a stroke on 31 July. It was his second stroke in less than two years.

"The late Mr Nathan passed away peacefully at Singapore General Hospital on Monday," the Prime Minister's Office said in a statement.

Ramanathan served two terms as president of the island nation between 1999 and 2011 before being succeeded by Tony Tan Keng Yam.

Singapore's president is head of state, but the office is largely ceremonial.

Nathan, a protégé of Singapore's best known president, Lee Kwan Yee, had held several top positions in the civil service and was high commissioner to Malaysia in 1988 and Singapore's ambassador to the United States from 1990 to 1996.

"His was a story of how a young boy strove to triumph over his circumstances and make a contribution to society. He held many public service posts, and occupied the highest office in the land," Prime Minister Lee Hsien Loong said in a Facebook post.

"He was a warm and approachable president who endeared himself to Singaporeans. I remember him as a man guided by a deep sense of duty to the nation. He stepped up each time duty called. He was a true son of Singapore," Lee added.

The Prime Minister's Office said arrangements for the public to pay respects and for the funeral would be announced later.

Nathan leaves behind his wife, daughter, son and three grandchildren.

The turning point of Nathan's professional life came in 1964, when he represented Singapore at the National Trades Union Congress in Algiers and successfully negotiated Singapore's acceptance into the Afro-Asian People's Solidarity Organisation.

Nathan overcame pressures from radical political groups that were sympathetic to communist parties in their countries and criticism of being neo-colonial stooge and got the grouping to consider Singapore's application the following year.

From then on, he grew to become what Singapore's founder-President Lee Kuan Yee heralded, at Nathan's 80th birthday, as "an indispensable man for all seasons".

"Every time there was a tricky task which required a steady hand, someone dependable and who could get things done, his name would pop up," said Lee.