If the first day of the Democratic National Convention was hijacked by disgruntled Bernie Sanders supporters, the second day on Tuesday focused effectively on Hillary Clinton, as former President Bill Clinton showed his unique ability to fire up the base by making a forceful case for the woman he called the best "darn change-maker" he's ever met. 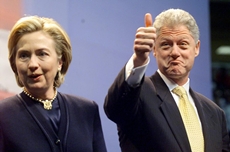 Earlier Tuesday, 68-year-old Hillary Clinton made history as she became the first woman to be nominated for the post of President by a major political party in the US.

In prime time, Americans were hooked as Bill Clinton opened his speech with the preamble: "In the spring of 1971, I met a girl."

He then segued into his wife's life journey, from the young woman with "thick blond hair and big glasses" he met in law school to a mother and a senator and a secretary of state. Bill Clinton's long, folksy telling of their love story was the evening's capstone and tried to open a window into Clinton's character and motivations by sharing a medley of personal anecdotes.

Hillary has weaknesses as a candidate: she has a lacklustre style on the stump and is often seen as untrustworthy or unlikable. She is a conventional candidate in an unconventional election in which voters seem to favour renegades.

Therefore, Bill Clinton sought to soften his wife's harder edges and transform the way people think about Hillary Clinton. He harked back to the spring of 1971, when he was a love-struck young man from Arkansas smitten by the brainy blonde he spotted across a law-school classroom. He elicited warm laughter from the audience in the Wells Fargo Center as he shared how Hillary left him speechless and how he proposed twice before she finally said yes the third time.

"We've been walking and talking and laughing together ever since,'' the former president said of the woman he would marry. ''We've done it in good times and bad, through joy and heartbreak. We built up a lifetime of memories."

Throughout the evening, Bill Clinton didn't lose sight of his main job of talking about Hillary's accomplishments as a public servant. The clear takeaway was intended to be that Hillary makes things better. She makes people's lives better. She has made his life better.

"Hillary has lived for so long in the public eye that it's not easy to separate her private persona from her public one. But Bill Clinton did a masterful job of making her tremendously likeable," said political analyst Adam Bradford.

"The vintage speech showed up Hillary Clinton as super-smart, strong, committed, determined and genuine," added Bradford. "This will go a long way in converting voters."

The night ended with a dramatic nod to history being made at the Democratic convention. Singer-songwriter Alicia Keys played "Superwoman" as a large screen television flashed a photo gallery of the nation's 44 presidents, all men and all but one of them white. Then it showed Hillary Clinton breaking through what looked like a plate of glass.

After President Obama was shown on screen, Hillary Clinton appeared via a live feed from New York.

''I can't believe we just put the biggest crack in that glass ceiling yet," said Hillary Clinton. "If there are any little girls out there who stayed up late to watch, let me just say: I may become the first woman president, but one of you is next.''

Hillary has pledged to give Bill Clinton a role in a potential second Clinton administration dealing with the economy, trying to capitalize on her husband's economic record while he was in the White House.

"I'm going to put (him) in charge of revitalizing the economy," Clinton said in Fort Mitchell, Kentucky, this May. "You know he knows how to do it, especially in places like coal country and inner cities and other parts of our country that have really been left out."