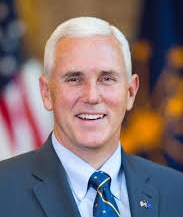 Republican Presidential aspirant Donald Trump, who is often criticised for lack of political acumen, is seasoning up with the selection of political insider and Indiana governor Mike Pence as his running mate.

Trump on Friday announced the choice of Indiana governor Mike Pence, a critic of Trump's anti-Muslim stance, as his running mate, ringing some legitimacy to his Presidential ambitions.

Pence, an experienced politician, has deep Washington connections and his choice is aimed in part at easing Republican concerns about Trump's fiery temperament and lack of political experience.

Pence, who spent 12 years in the Congress before being elected governor, on the other hand, has a calm demeanor. Despite opposition to his anti-Muslim stance, Pence supports Trump in all political and social issues.

However, Pence remains a less known figure in American politics and, unlike Trump, is disciplined and relatively discreet in his manner and speeches and more conventional in his political convictions.

A lawyer by training and former radio talk show host with strong communication skills, Pence knows his way around the US capital - he held a seat in the House of Representatives from 2001 to 2013 and served as chairman of the House Republican Conference, the party's third most important position on Capitol Hill, from 2009 to 2011.

The two men have scheduled a news conference for Saturday in New York to present themselves to America as the Republican team that will take on Hillary Clinton and her Democratic running mate in November. The duo will head to Cleveland next week for the Republican National Convention.

Trump appears to have ignored their numerous political differences of the past by choosing Pence as his running mate while Pence on Friday told reporters he "couldn't be more happy for the opportunity to run with and serve with the next president of the United States."